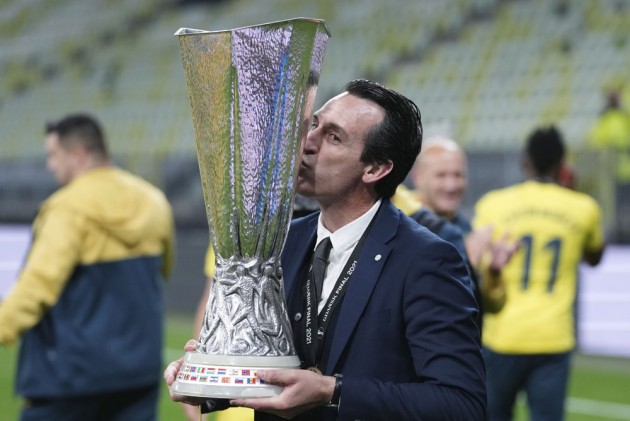 Unai Emery has set his sights on the Champions League after guiding Villarreal to their first major European title thanks to an upset of Manchester United in the Europa League. (More Football News)

Villarreal surprisingly conquered United in the Europa League final following a marathon 11-10 penalty shoot-out in Gdansk, where the match finished 1-1 after extra time on Wednesday.

Gerard Moreno's first-half opener was cancelled out by United star Edinson Cavani in the 55th minute and the showdown was decided on penalties.

LaLiga outfit Villarreal are the first side to win in their first appearance of a major European final since Shakhtar Donetsk in the 2008-09 UEFA Cup.

Villarreal will now feature in the Champions League group stage for the first time since 2011-12 and Emery revelled in the achievement post-match while seeking continuity at the club.

"I feel proud [of the credibility of the project] and responsible as I have participated here," Emery said during his post-match news conference. "What they want me to come here for? They didn't want me to come to win the Europa League, because this is very difficult.

"They wanted me to make a job, and the job to give results. In fact, my goal, as I transmitted to the players and the club is to give continuity, hopefully, to be in Europe year after year, with certain continuity.

"Logically, to win a title is something that always is in our mind, and above all, Villarreal build and create the circumstances to be able to have this chance… in the Copa del Rey… to win LaLiga title is more complicated because of the force the top four have right now.

"But we can make our way in the Europa League and now will have the chance to compete in the Champions League. This season in the Europe League our way has been impeccable since the day one."

Moreno opened the scoring in the 29th minute in Poland midweek to move level with Giuseppe Rossi as Villarreal's leading all-time goalscorer with 82, 30 of which have come this season.

Villarreal's Moreno became the first player to score 30-plus goals for the Yellow Submarine in a single season in all competitions since Rossi in 2010-11 (32).

"It's a dream come true," Moreno said. "We remember everything we've done to work toward this. Everyone deserves it; the president, the vice-president.

"We wanted to make history in a big way and we've done it. This has been my best year. Individually and collectively, it's a dream to end up with this title, to be able to score. It's incredible, we're on a cloud."