India first bowled out Scotland for 85 runs in 17.4 overs before KL Rahul blasted the fastest fifty of the tournament to see India romp home in 6.3 overs. 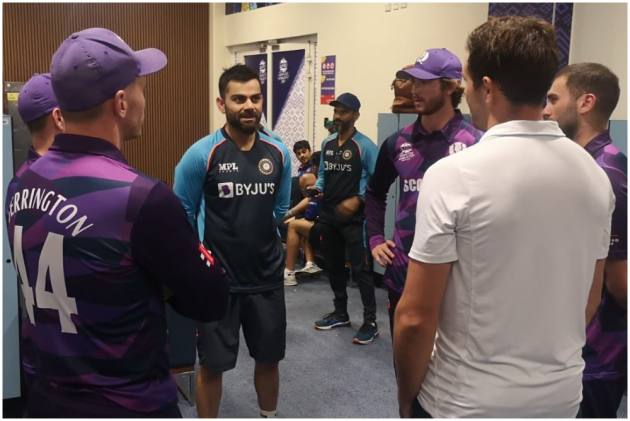 Indian cricketers including captain Virat Kohli and his deputy Rohit Sharma shared their ‘priceless’ experiences with the Scotland cricket team following their eight-wicket win in the Super 12 match of the T20 World Cup 2021 in Dubai on Friday.

Besides Kohli and Rohit, other Indian stars like Jasprit Bumrah and Ravichandran Ashwin were also seen interacting with the Scottish players in their dressing room after the match on Friday night. “Huge respect to @imVkohli and co. for taking the time," Cricket Scotland tweeted.

“Priceless,” it wrote along with pictures of the interaction. India put up an all-round effort to pulverise Scotland and keep their semifinal prospects alive. The entire match lasted a mere 24.1 overs as India skittled Scotland for 85 in 17.4 overs and then needed only 6.3 overs to knock off the runs.

Who would you want to ask one question to?

The dominating win took India's net run-rate to +1.619, which is now best among all six teams, even better than top-placed Pakistan (+1.065).

To surpass Afghanistan's current net run-rate of +1.481, India needed to score the required runs in 7.1 overs and KL Rahul (50 off 19 balls) and Rohit Sharma (30 off 16 balls) added 70 in five overs to make sure that they achieve it in style.

Scotland had won all their three matches in Group B to qualify for Super 12. But they crashed out after losing all their last four matches. Meanwhile, this is not the first time a team have shown such a gesture to the opposition in the ongoing T20 World Cup.