Virat Kohli And I Would Have Been Real Enemies: Shoaib Akhtar

Former Pakistan bowler Shoaib Akhtar admitted his admiration for Virat Kohli, and said that he and the India captain would have been the best of friends and enemies 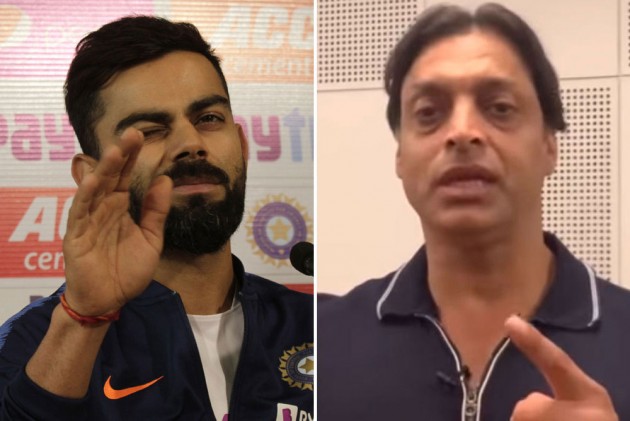 Former Pakistan speedster Shoaib Akhtar believes if he were playing today, India skipper Virat Kohli and him would have been friends and enemies at the same time. (More Cricket News)

"We are both Punjabis with a big heart. We would have been best of friends off-field and fierce enemies on-field," Akhtar said while speaking in the latest episode of ESPNcricinfo Videocast.

"With Virat if you fight, he gets more focused. So to bowl him out, I would try to get him to lose focus. I would try to get into his head. At my extreme pace, I would have instigated him to pull me or play a cut because he doesn't have these two shots.

"I know he loves to drive, so again at my extreme pace, I would get him to drive and would have kept talking to him in between. Something like what (James)Anderson did to him in England," he added.

Commenting on the batsmen he would not be able to bowl out, the 'Rawalpindi Express' said: "To be honest, it's Inzamam-ul-Haq. See my action is very complicated unlike Bret Lee's but I could not bowl him out even once in the nets in 10 years. I think he could read the ball a second faster than others."

He also praised few other batters like Martin Crowe and Rahul Dravid. "I think Martin Crowe would have played me well too. He was a magician and very elegant. Among Indian players, Rahul Dravid is the most decorated batsman. If he won't offer me a shot, I would not be able to penetrate his defense. I also think Jacques Kallis is one of the best all-rounders, and slip fielders cricket has ever produced."

Former Indian opener Virender Sehwag was among the few batsmen who could play Akhtar as ease. Clarifying, Akhtar said: "I bowled him short initially when I should have bowled the ball that's going away from him. After I figured him, he could not score much against me. I bowled him out on multiple occasions, including at the IPL and in Lahore in."

The former Pakistan pacer also expressed his displeasure on the state of fast bowling in times of modern-day T20 cricket.

"There has been a fall in the popularity of the game and ICC is to be blamed for it," said Akhtar. "I have been voicing for last 10 years to open the bouncers for fast bowlers. Till there is no rivalry like Sachin (Tendulkar) vs Shoaib, you won't get following."

He is also not very happy with the current state of fast bowling in Pakistan. "What you need in team today are characters, players who can hunt you down, who can run like a lion and think like a Leopard. You have to bring people like me in Pakistan Cricket Board (PCB)."

"I will find such people, train them in all aspects like how to eat, how to talk, how to bowl, mannerisms and build them up as a brand. But average management will bring average people into the system and sadly that's what is happening in Pakistan today."