The run-up to the day-Night Test has been dominated by the playing conditions, but Virat Kohli said that, possibly, the biggest factor is the presence of fans 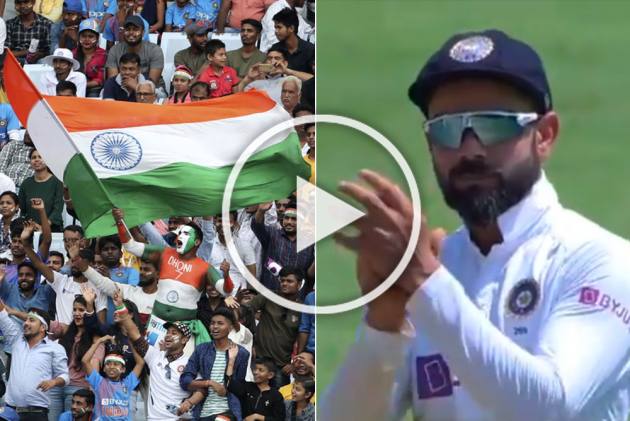 On the eve of the third Test match against England, India captain Virat Kohli highlighted the importance of cricket fans. The penultimate match, a day-night affair, of the four-Test series at the refurbished Sardar Patel Stadium in Ahmedabad starts Wednesday.

"Crowd plays a massive role. The crowd really gets behind us and the difference of which we saw in the second Test. You know, the opposition does feel the pressure when you go to play in Australia, England, South Africa and New Zealand or anywhere," Kohli said during a virtual press conference on Tuesday.

Who doesn't love the crowd ðÂÂÂ¤ÂÂÂðÂÂÂ¤ÂÂÂ

We are happy to have the support of #TeamIndia ðÂÂÂÂÂÂ®ðÂÂÂÂÂÂ³ fans and it shall be no different at Motera ðÂÂÂÂÂÂÂÂÂï¸ÂÂÂ @imVkohli #INDvENG @paytm pic.twitter.com/6m1TJPPmZu

India lost the series opener in Chennai in front of empty stands, but the hosts hit back in style, winning the second Test at the same venue as cricket fans, albeit in limited numbers, make a return to the stadium for the first time since the coronavirus lockdown last year.

When in Chennai, you #WhistlePodu! ðÂÂÂÂÂÂðÂÂÂÂÂÂ#TeamIndia skipper @imVkohli egging the Chepauk crowd on & they do not disappoint. ðÂÂÂÂÂÂðÂÂÂÂÂÂ @Paytm #INDvENG

"Our experience is that as a batsman when you walked into the field and thirty thousand fans are going in your way, clapping as bowlers running into bowl... it does get in your head," Kohli added as he shared the first-hand experience. "So, you would love for that atmosphere to be present and make life more difficult for the opposition and really get behind the team".

The run-up to the pink ball Test, with a virgin Motera strip, has been dominated by the playing conditions and the nature of the pitch. But Kohli said that, possibly, the biggest factor is the presence of fans.

"That's what playing at home is all about. It's not only about the conditions on the field but fifty thousand people and their energy behind your team. It does push you in the right direction. And it does put a lot of pressure on the opposition," the 32-year-old added.

Earlier, BCCI president and former India captain Sourav Ganguly revealed that all tickets for the match have been 'sold out’. The Motera stadium, the biggest cricket stadium in the world, has a capacity of 110,000 people and the match will witness 50 per cent occupancy due to concerns over COVID-19.

"Ahmedabad is totally sold out, the day-night Test match, because it's the first game there after a long period of time," BCCI president Sourav Ganguly said.

"So, happy to see normalcy back. It'll be fantastic, it's sold out.

" … We want to see every seat and stand full. And that's what it is, the tickets have gone, as well as for the T20s (that follow the Tests)."

Impressed with the facility, England pacer Stuart Broad shared a video of the venue.

Interestingly, a year ago, Prime Minister Narendra Modi hosted then United States President Donald Trump at the venue with more than 100,000 people turning up for the event.