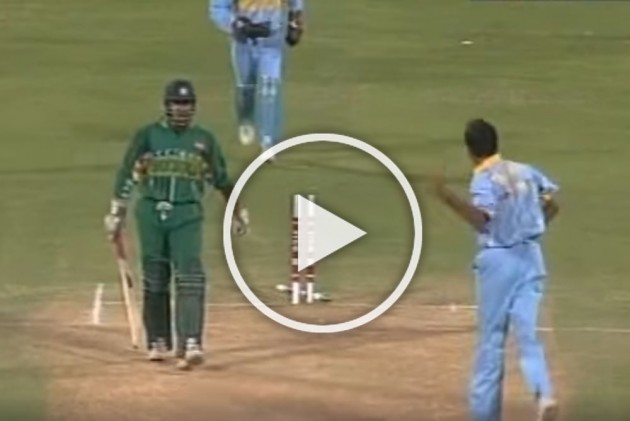 Kohli spoke about this dismissal during a candid chat with India football captain Sunil Chhetri on popular social media platform Instagram on Sunday.

The incident took place during the last eight stage of the showpiece event at M. Chinnaswamy Stadium and Sohail hit Prasad for a boundary through the covers and then had a verbal exchange, while pointing towards the boundary rope.

The next delivery, Prasad bowled full steam and uprooted Sohail's stumps and also gave him a send-off. Kohli and Chhetri recalled that moment during their Instagram live video session, hosted by the latter.

"Where were you exactly when Aamir Sohail hit Venkatesh Prasad for a boundary... trash talked... and then saw his stumps sent for a cartwheel right the next ball?" Chhetri asked.

"I was at home. I celebrated in the same manner as I do today. For me, there is no clean bowled as satisfying as that in the history of the sport. It is one of the most iconic moments," Kohli said.

"That day, not many people in India would forget, regardless if you were a cricket fan or not," Chhetri quipped.

During the fun hour-long chat, Kohli also expressed his admiration for Portuguese footballer Cristiano Ronaldo and how the Juventus forward possesses a 'beast mentality'.

Taking cue from that, Chhetri asked Kohli about his teammates who aren't so good at the 'Beautiful Game' and the India captain pointed finger towards spinner Kuldeep Yadav.

"He is such a big football fan especially Neymar's. He can talk about it a lot because he is very knowledgeable and he can play well online. But if you hand him the ball, he can't do it," Kohli said, leaving Chhetri in splits.

Kuldeep took note of Kohli's revelations but didn't agree with his skipper. He wrote in the comments section: "Jhuth Bhaiya (lies brother)."