India's fate now depends on the outcome of the New Zealand versus Afghanistan encounter on a Sunday afternoon in Abu Dhabi. 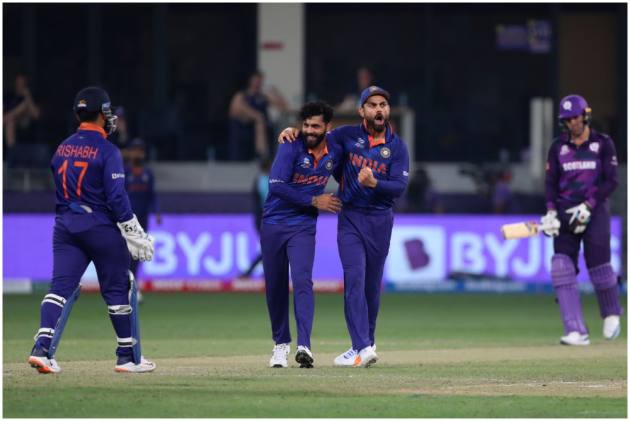 Virat Kohli doesn’t want to go overboard after India’s second consecutive dominating victory in the T20 World Cup 2021 even though he rued the absence of a couple of ‘good overs’ which could have possibly changed the outcomes of the games against Pakistan and New Zealand.

India trounced Scotland by eight wickets in 6.3 overs while chasing 86 for a win to stay alive in the semifinal race. In the previous game, India beat Afghanistan by 66 runs. However, the losses against Pakistan and New Zealand meant that now their fate depends on the Afghanistan-New Zealand game on Sunday.

“It’s a dominating performance. It was something we were striving to again. I don’t want to say too much about today because we know how we can play,” said Kohli at the post-match presentation ceremony.

“These little things in T20 cricket (toss, conditions) matter and we're glad to be back in our mojo.” Kohli though regretted the fact they could not play their usual dominant games against Pakistan and New Zealand.

“We basically broke it down to the fact that we couldn't get away at all in those two games, two overs could have made the difference. I'm just pleased everyone is getting into their own,” he said. The India skipper said they wanted to restrict Scotland to ‘100-120 max’.

“But we restricted them to a total that allowed us to leapfrog everyone else. We spoke about finishing in the 8-10 over bracket. You don't want to go in with a six-and-a-half or a seven-and-half run mark because then you're doing too much. We gave that bracket and allowed them to get that momentum.”

KL Rahul (50) and Rohit Sharma (30) came out all guns blazing as they scored 70 runs in first five overs to seal the deal for India. “If you look at our practice games as well, the guys have been batting like that. Two overs of cricket like that and the momentum of the tournament could have been completely different.”

Scotland skipper Kyle Coetzer admitted that they were ‘outclassed in every department’. “But the only way we'll improve is going through games like that and seeing it head on. Mark’s been excellent, he’s got an array of skills. Great to see him learning from other spinners here as well and that's why these tournaments are important,” he said.