Virat Kohli's Take On DRS: Umpire's Call Creates Confusion, If Ball Is Hitting Stumps It Should Be Out

As per the existing rule, at least 50 per cent of the ball should be hitting at least one of the three stumps for the batsman to be adjudged LBW on review 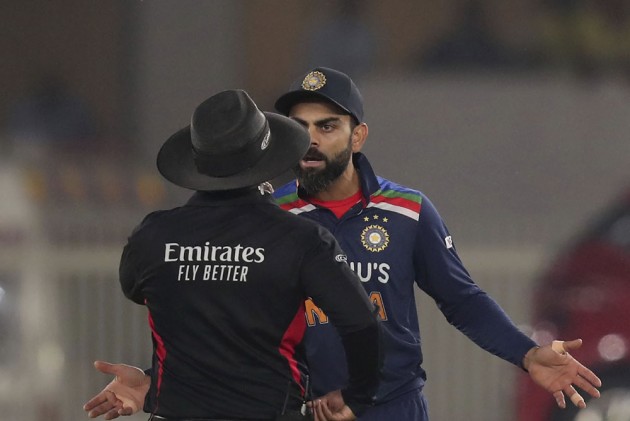 India skipper Virat Kohli on Monday criticised the fiercely-debated umpire's call in the Decision Review System, saying it is creating a lot of confusion and LBW dismissals should be based solely on whether the ball is hitting the stumps, even if marginally. (More Cricket News)

As per the existing rule, at least 50 per cent of the ball should be hitting at least one of the three stumps for the batsman to be adjudged LBW on review in case an umpire's call has been challenged.

"According to me, umpire's call right now is creating a lot of confusion. When you get bowled as a batsman, you don't expect the ball to hit more than 50 per cent into the stumps to consider yourself bowled.

"So from basic cricket common-sense, I don't think that there should be any debate on that. If the ball is clipping the stumps, that should be out whether you like it or not, you lose the review."

Kohli, who was critical of the on-field soft signals following Suryakumar Yadav's dismissal during the T20 series against England, said the game has to be kept simple.

"That's how simple the game has to be if it hits the stumps, or it misses the stumps. It doesn't matter how much it's hitting, and those kinds of things, because it's creating a lot of confusion.

"...and you know the one more factor that needs to be considered is that, you know, how the fielding team responds to a dismissal that is claimed is also somewhere, defining soft signals as well," he said.

"You have to question what the spirit of the game is and what those guidelines are, because if, things like that happened with the Indian cricket team overseas, then you are talking about a totally different conversation of spirit of the game...," he asserted.

Kohli said the things could come to a head in high-stakes tournaments if controversial umpiring calls end up affecting results.

"...there's a lot at stake in the future with the big tournaments, and you don't want some grey area factors in the game, which leaves you with no clarity to be the defining factors of those big tournaments."

Spin great Shane Warne for long has called for a tweak in the umpire's call, expressing a view similar to Kohli on the subject.