By beating Novak Djokovic in Sunday's final, Daniil Medvedev became the first Russian to win a major title since Maria Sharapova in 2014. 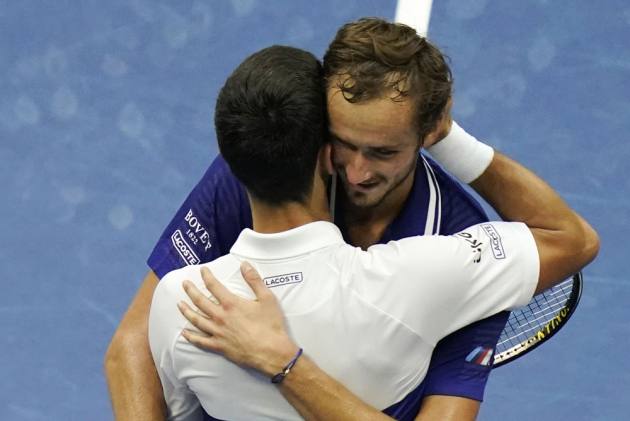 Daniil Medvedev received congratulations from the Kremlin on Monday after ending Russia's 16-year wait for a men's Grand Slam title with victory over Novak Djokovic at the U.S. Open. (More Tennis News)

President Vladimir Putin hailed a "brilliant victory" in an official message of congratulations.

"On the path to the final of this prestigious competition, you demonstrated the highest class of skill and perseverance in reaching your aims and in the deciding match you performed in a confident and collected manner, not leaving a chance to a strong and renowned opponent," Putin wrote.

"That is how real champions play!"

By beating Djokovic in Sunday's final, Medvedev became the first Russian to win a major title since Maria Sharapova in 2014, and the first Russian man since Marat Safin in 2005. It was a long wait for a country which once prided itself on its strength in depth in the men's rankings.

Medvedev had to cope with a New York crowd which had expected to see Djokovic complete an historic calendar-year sweep of major titles. Some fans jeered Medvedev as he closed in on victory.

Russian Foreign Ministry spokeswoman Maria Zakharova was among those congratulating Medvedev on his composure, highlighting his warm words for Djokovic — whom Medvedev called "the greatest tennis player in history" — during the trophy presentation.

"I was impressed by Daniil Medvedev's speech during the presentation. He talked about his opponent with such respect and dignity, paying tribute to the the skill and achievements of Novak Djokovic," Zakharova wrote on Facebook.

The raucous New York crowd annoyed some on Russian-language social media, but it was nothing new to Medvedev. He once said he thrived on boos and jeers on his way to the 2019 final at the U.S. Open, which he lost to Rafael Nadal in five sets.

Medvedev told state TV he hoped his success would spur Russian tennis on.

"I'm happy that I could win and that I've entered my name into the history of Russian sports and tennis in some way," he said in comments broadcast Monday, adding that now he hoped to see an all-Russian Slam final.

"It's definitely possible that we can win the Davis Cup and a heap of other team events. I hope that tennis will stay on the rise in Russia."

Between 1996 and 2005, Russians won four men's Slam titles through Yevgeny Kafelnikov and Safin. After that, Safin, Nikolay Davydenko and Mikhail Youzhny reached Slam semifinals but none played another major final.

As Roger Federer, Rafael Nadal and Djokovic dominated the scene, Russian men's tennis quietly declined. For parts of 2015, there was no Russian player in the top 50 of the ATP Tour rankings.

Now there are two in the top five, with Medvedev at No. 2 and Andrey Rublev at No. 5. Aslan Karatsev was a semifinalist at this year's Australian Open and Karen Khachanov won the Olympic silver medal last month.

On Monday, Youzhny told Russian newspaper Sport Express that the second-ranked Medvedev could yet surpass Djokovic for No. 1.

"Judging by the level of his game and his results, he's one of the main candidates for first place in the rankings," Youzhny said.