Virat Kohli and AB de Villiers were sharing a light moment in the dressing room as the latter imitated his captain's celebration, evoking laughter from the rest of the squad. 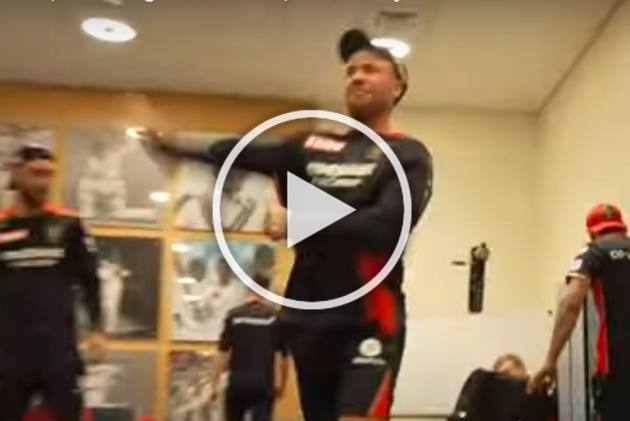 It was a fun night in the RCB dressing room filled with celebrations. The team from Bangalore dismantled the Mumbai Indians’ batting line-up, wiping them out for 111 after setting a target of 166. The atmosphere in the RCB camp was jubilant. There was a lot of praise showered upon the players from both the captain and the coaching staff.

However, it was AB de Villiers who brought a smile to everyone’s face by doing something unexpected. After the presentation ceremony, even as Virat was addressing his men in the dressing room, AB de Villiers decided it was time for a light moment. The Protean started charging down the dressing room, imitating Virat Kohli’s celebration on the field a couple of hours earlier.

The highlight of Virat’s address was to remind his players to stay calm. His words, “stay calm guys, its just one game,” were also repeated by the former South-African player as he mimicked the RCB skipper.

AB de Villiers can be seen throwing a couple of fist pumps in the air, before going to embrace his skipper while imitating him. After the hug, De Villiers turns around, does a few more jumping fist pumps. The entire dressing room erupted in a chorus of laughter.

After having had his fun, De Villiers ends it with a calm Virat-like walkout from the dressing room with the words, “Stay Calm guys, Its just one game.”

With this comprehensive and convincing win over Mumbai Indians, RCB is now back on track to fighting for a spot in the playoffs of IPL 2021.