Watch: This Pakistani Cricket Fan Has Some Incredible Ideas For His Team, Sarfaraz Ahmed

The man, in a Pakistan cricket team jersey and black jacket, from Lahore, commenting on the status of his team's fitness, said they should be made to wrestle and not play cricket. 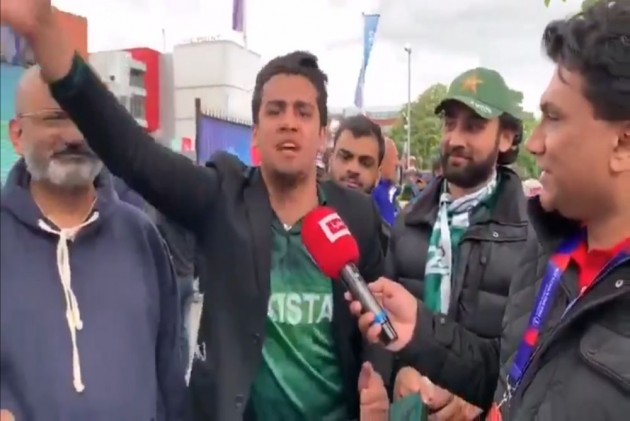 The much-anticipated ‌India-Pakistan encounter in the ICC Cricket World Cup 2019 proved to be a damp squib On Sunday.

The men-in-blue outclassed the men-in-green in all departments of the game and won the match by 89 runs (D/L method).

Pakistan's defeat, however, didn't anger their fans this time around, for they were throughout the match actively trolling their own side on Twitter and admiring India's athleticism and dedication on the field.

And one among such fans gave an interview to a TV channel outside Old Trafford after the match.

The man, in a Pakistan cricket team jersey and black jacket, who spoke Punjabi, commenting on the status of his team's fitness, said they should be made to wrestle and not play cricket.

"I am given to understand that they were having burger and ice-cream last night; who does that," the fan said.

Another man, possibly the friend of this fan, removes his goggles and wipes his tears with a Pakistani flag.

The man continued his tirade against the Pakistani side and picked on captain Sarfaraz Khan. "Sarafaraz should take sleeping pills," the fan said.