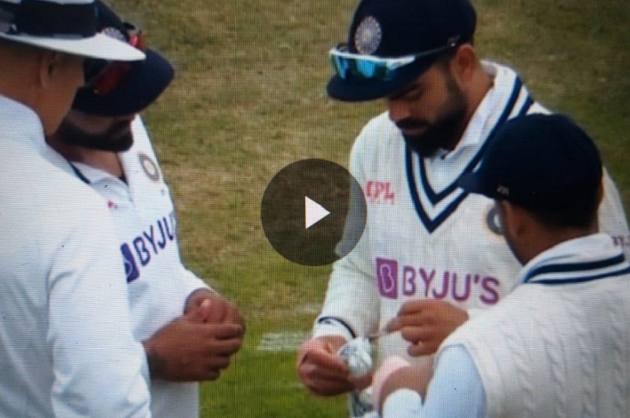 From being forced to change stance, swashbuckling Rishabh Pant was in limelight again when the wicketkeeper was forced to remove tapes on his gloves on the second day of the third Test at Headingley.  3rd Test Blog | Scores | News

The tapes had been used to stick his fourth and fifth fingers together, which is not allowed. Webbing is only allowed between index finger and thumb. The matter came to light when Dawid Malan was caught leg side and on field umpires Alex Wharf and Richard Kettleborough approached the wicketkeeper to remove the tape.

According to law 27.2.1: If, as permitted under 27.1, the wicketkeeper wears gloves, they shall have no webbing between the fingers except joining index finger and thumb, where webbing may be inserted as a means of support.

Commentators Naseer Hussain and David Lloyd were quick to pick things up said it wasn’t right on Pant’s part to have additional webbing on his gloves.

"There are lots in the laws of the game about the webbing but we're hearing from the third umpire, Richard Illingworth, that he wasn't allowed and he's not allowed to tape his gloves like that, so they've asked him to take that tape off," Hussain said.

Llyod went on to question whether Dawid Malan, who was out prior to umpires noticing the taping on Pants gloves,  should he be recalled as Indian wicketkeeper had clearly broken the rules of the game.

"It's a very interesting point you made, when Dawid Malan was caught down the leg side did the wicket-keeper have that tape on his gloves? Is it a problem?" Llyod said.

Earlier, Pant was made to change his stance after being told by the umpire. Pant was batting outside the crease to negate swing and it formed footmarks in the pitch's danger area at Headingley.

"Because I was standing outside the crease and my front-foot was coming into the danger area, so he (the umpire) told me that you can't stand there," Pant said during the virtual post-day press conference on Wednesday.