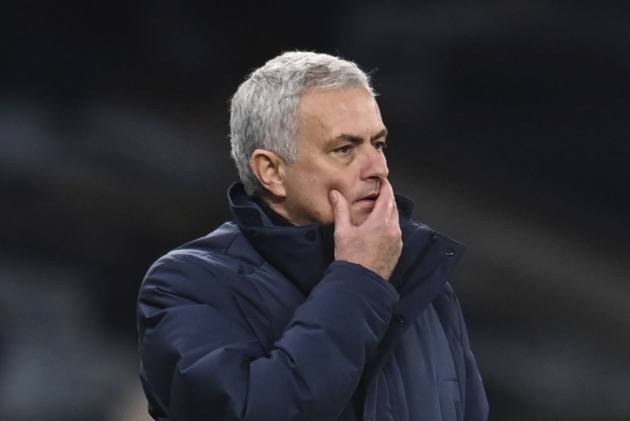 Tottenham should have kept Jose Mourinho in charge for the EFL Cup final as he knows how to set up a team to play against Manchester City, says Wayne Rooney. (More Football News)

The day after confirming their involvement in the 12-club breakaway European Super League, Spurs announced the departure of Mourinho after less than 18 months in charge.

A 2-2 draw away at Everton last week further damaged Tottenham's hopes of a top-four finish in the Premier League, while they were knocked out of the Europa League after failing to hold on to a 2-0 first-leg lead against Dinamo Zagreb at the last-16 stage.

However, they do have the possibility of securing silverware on Sunday when they take on City at Wembley, making the timing of Mourinho's departure a surprise to Rooney.

"I think it's crazy doing it before a cup final - strange timing anyway," the Derby County boss told the media.

"Surely they could have waited until after the cup final if that's the direction they wanted to go in? Jose is a fantastic manager, one of the best managers the game has seen.

"Unfortunately, his time has come to an end at Tottenham, but I'm sure he will bounce back. There will be a lot of top clubs out there looking to bring him in."

51% - Only with Leiria (45%) has José Mourinho posted a lower win ratio in all competitions in his managerial career than he has with Tottenham Hotspur (51% - won 44/86 games). Sacked. pic.twitter.com/lunYGIMwh8

Rooney worked with Mourinho during his final season as a Manchester United player, including making a brief cameo appearance off the bench in the Europa League final win over Ajax in 2017.

The former England international feels the Portuguese coach could have helped Spurs produce an upset against City, who saw their hopes of a quadruple ended at the weekend when they exited the FA Cup with a semi-final defeat to Chelsea.

"I just think before a cup final, Mourinho is a manager who loves to win trophies, it's clear to see, he's won a lot of trophies throughout his career," Rooney continued.

"I think if there was one manager to set a team up to play against [Manchester] City, in a cup final, it's Jose Mourinho.

"Now, obviously, Tottenham haven't had the best of seasons, so I think from that point of view, I think it's a bit crazy and is a massive risk.

"I'm sure Daniel Levy could have waited until the day after the game because I think that would have made more sense if they wanted to get rid of Mourinho."

Mourinho had replaced Mauricio Pochettino at Spurs during the previous campaign, steering them to a sixth-placed finish in the league.

Rooney expects the former Chelsea, Inter and Real Madrid boss to be in demand around the world, despite his latest ill-fated spell in charge of a club.

"I'm sure there are a lot of teams in England who would love to see him managing their clubs," he said on Mourinho's future.

"So, that's purely up to him if he wants to go into another club in England. I'm sure there are a lot of clubs around the world who would love to have him."