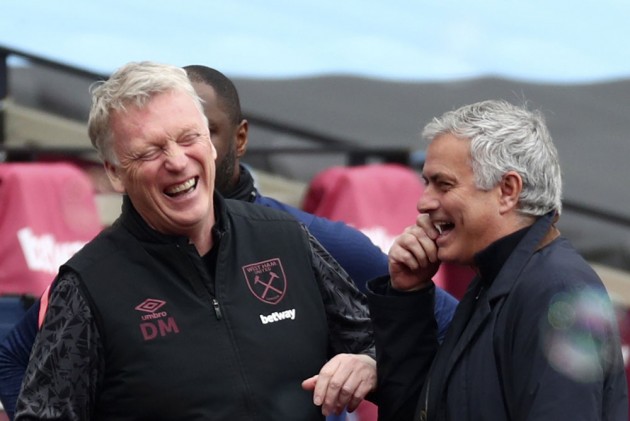 Moyes enjoyed his first victory over Mourinho at the 16th time of asking, spoiling the under-fire boss' 50th top-flight game at the Spurs helm as the Hammers climbed to fourth.

Michail Antonio gave the hosts the lead after just five minutes and they were even quicker out of the blocks in the second half, the in-form Jesse Lingard on target.

Spurs, who squandered a 3-0 lead with 10 minutes remaining to draw the reverse fixture 3-3 in October, hit back via Lucas Moura's header but Gareth Bale struck the crossbar as a comeback failed to materialise.

Antonio put Moyes' side ahead, prodding home from close range after Hugo Lloris had repelled his initial effort from Jarrod Bowen's cross.

Harry Kane blasted wide at the end of a swift Spurs counter-attack as the visitors sought a quick response.

A sickening clash of heads between Tomas Soucek and Davinson Sanchez saw the former head off after his face was bloodied, leaving West Ham down to 10 men for a spell which they weathered without consequence.

Craig Dawson's bullet header forced Lloris to tip over his bar before half-time, with Lukasz Fabianski smartly denying Erik Lamela at the other end.

Spurs' woes deepened just over a minute into the second half as Lingard raced through to slot confidently past Lloris, leaving Mourinho looking glum on the touchline.

Kane, who had scored 11 goals in 15 league games against the Hammers prior to Sunday's clash, sent a long-range effort narrowly wide of Fabianski's left-hand upright around the hour mark.

Bale's spectacular attempt from the edge of the box cracked against the bar, with the woodwork again struck following a stoppage-time deflection off Son Heung-min, as West Ham ultimately stood firm in the face of significant late pressure.

What does it mean? Champions League ambitions fading for Spurs

While West Ham are eyeing a seat at European football's top table, Spurs' own Champions League aspirations are fading fast.

Mourinho's men are now nine points behind the Hammers, albeit with a game in hand, with the Europa League perhaps offering their best route back to the big time.

Mourinho's half century a damp squib

With 50 top-flight games in the Spurs dugout now under his belt, Mourinho's impact can be meaningfully measured, and the results are not great.

Lingard took his goal, which proved decisive, with the confidence of a man in form.

He has scored three goals in four league games under Moyes at West Ham, as many as he managed in his 36 matches under Ole Gunnar Solskjaer at Manchester United.

- Tottenham's eight league defeats this season are Mourinho's most since 2015-16 with Chelsea when he was sacked after nine league defeats.
- The 81 points Spurs have picked up under Mourinho is 14 fewer than he has managed with any other side throughout his first 50 league games in charge (Manchester United, 95).
- West Ham will spend a night within the top four in a top-flight campaign after at least 25 matches have been played for the first time since 1985-86, when they finished the season in third.
- Antonio has scored 42 Premier League goals and they have all come from inside the area - in the competition's history, only Tim Cahill (56), Javier Hernandez (53) and Gabriel Jesus (45) have scored more with all of them coming from inside the box.

Tottenham host Wolfsberger in the second leg of their Europa League last-32 tie on Wednesday, boasting a 4-1 advantage, and then welcome Burnley in the league on Sunday. The Hammers head to runaway league leaders Manchester City on Saturday.