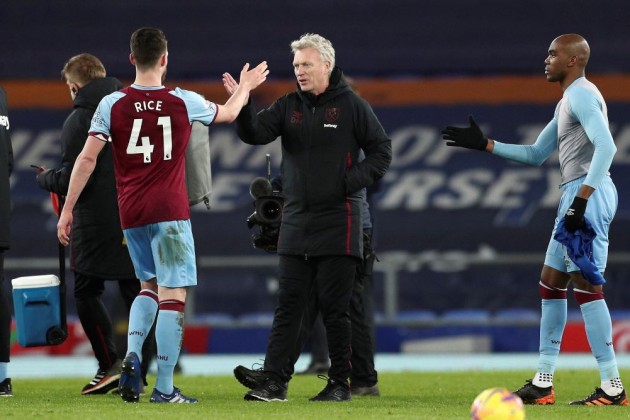 On an unusually quiet New Year's Day by the Premier League's normal standards, it is fair to say West Ham's 1-0 win at Everton probably didn't capture the imagination of many neutrals.  (More Football News)

A cagey and tense match for the most part, West Ham eventually claimed the three points in the latter stages to hand Moyes his first win at Goodison Park since leaving Everton for Manchester United in 2013.

In the almost eight years since, not a great deal has gone Moyes' way. But this was evidence that he appears to be on the right path with the Hammers and potentially enjoying the start of a reputational restoration.

His West Ham of 2020-21 have plenty of creative talent, but the team and system remain focused on being solid at the back. They certainly were on Friday.

Everton, who would have moved second with a win, managed just two shots on target in the entire match, three fewer than their visitors, and Moyes' men began to show a greater attacking threat even after the hosts introduced Andre Gomes and James Rodriguez from the bench.

1 - West Ham boss David Moyes has secured his first win at Goodison Park in five visits in all competitions since leaving Everton in 2013 (L4). Relief. pic.twitter.com/7b3e6uPdii

It wasn't really until the second half that the game began to open up and Everton looked capable of potentially cutting through West Ham's resolute backline.

But even then, Angelo Ogbonna was colossal at the back, proving to be in the right place at the right time so often.

He made seven clearances in total, more than anyone else on the pitch, and also chipped in with a couple of interceptions.

Dominic Calvert-Lewin struggled to impose himself against the Italian, failing to register a shot on target, and the England international's Premier League goal drought increased to five matches.

Ogbonna hasn't always been a convincing defender during his time in England, but his was a prime example of just how imperious he can be.

In his brief time in the Premier League, Tomas Soucek's well-rounded style of play has attracted admirers.

While his distribution was occasionally a little slack here, it's clear why he is such an important figure for West Ham.

Soucek got the winning goal with a poacher's effort in the latter stages, his fifth in his past 10 Premier League games.

But he was an effective presence all over the pitch.

No one on the pitch recovered possession more often than Soucek (15), and Aaron Cresswell was the only West Ham player to better his 67 touches of the ball.

Everton manager Carlo Ancelotti has faced Moyes more times in the Premier League without winning than against any other coach, drawing three and losing three of their six meetings.

Calvert-Lewin was always likely to be key if Ancelotti was to finally get the better of Moyes, but it wasn't to be.

Now five league games without a goal, his form is a far cry from run that saw him net 11 in his first 11 games in the competition this season.

When the back-up is a Cenk Tosun without a league goal since last January, while on loan at Crystal Palace, you have to worry about Everton's top-four chances.