Rishabh Pant is being seen as Mahendra Singh Dhoni's successor across format but of late the 21-year-old has been criticised for his shot selection at crucial junctures, more so during the ongoing series against the West Indies. And former India opener Virender Sehwag has some words of wisdom for the young wicketkeeper-batsman 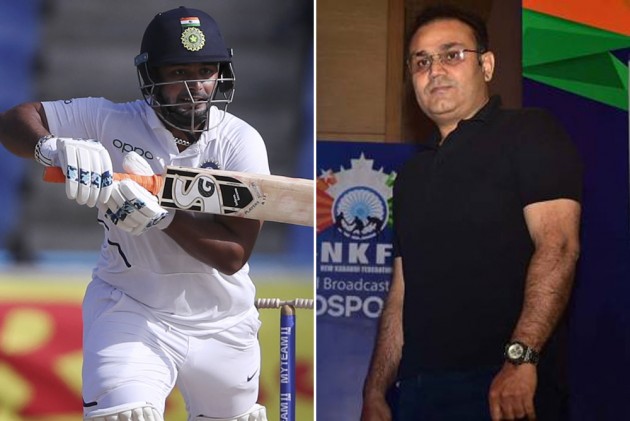 Rishabh Pant's poor shot selection has caused his downfall more often than not and Virender Sehwag on Monday hoped the keeper-batsman "works to better his game" and justify the team management's faith. (More Cricket News)

The 21-year-old Pant is being seen as Mahendra Singh Dhoni's successor across format but of late has been criticised for his shot selection at crucial junctures, more so during the ongoing series against the West Indies.

However, Sehwag wants people to show patience with the young left-handed batsman.

"Pant is an extremely talented cricketer with huge potential. It will be important that he is groomed well," Sehwag told PTI.

"And now that he has been assured some quality time in the team it is important that he makes the best use of the opportunity and works to better his game and develop as a cricketer," he added.

Sehwag is hopeful that the current Indian team can do well, with the quality of pacers and the bench at its disposal.

Asked if this team can win the World Test Championship in 2021, Sehwag said: "Two years is a long time. Yes, the team is in good hands. I wish Ravi Shastri all the luck for his second innings and Virat Kohli all the very best.

India got off to the best possible start in the World Championship, crushing West Indies by 318 runs in the opening Test of the two-match series.

The win took India to the top of the championship table with 60 points.

Sri Lanka are currently second although they have an equal number of points. Australia and England are currently third and fourth respectively with 32 points each.