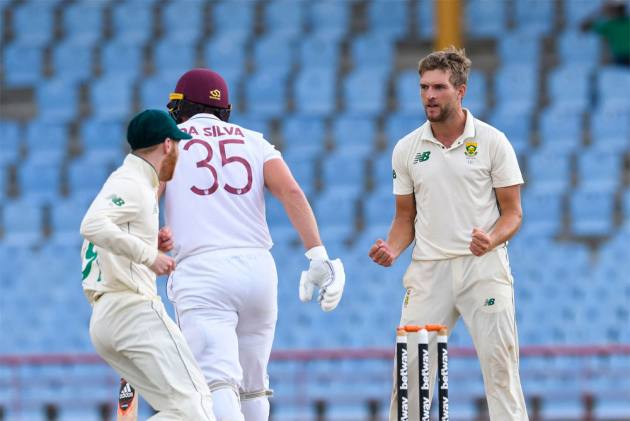 South Africa defeated West Indies by 158 runs in the second and final Test to win the series 2-0. Chasing a target of 324 runs at Daren Sammy National Cricket Stadium, St Lucia, the Windies were bowled out for 165 runs in their second innings on Day 4 despite Kieran Powell's gritty fifty. This time, the collapse was triggered by Keshav Maharaj, who took five wickets for 36 in 17.3 overs. But Kagiso Rabada, who cleaned up the Windies' top-order by claiming the wickets of Kraigg Brathwaite, Shai Hope and Kyle Mayers, won the man of the match award. In the first innings, the fast bowler also took a couple. Besides, he also scored 40 crucial runs in South Africa's second innings. This was Proteas's eighth win in their last ten meetings with the Windies. Earlier, replying to South Africa's first innings total of 298 runs, the Windies scored 149. Then, Kemar Roach and Kyle Mayers took four and three wickets each to dismiss the Proteas for 174 in the second essay. Rassie van der Dussen top-scored for the visitors, with an unbeaten 54. The Windies started the penultimate day on 15/0 with Powell and Brathwaite unbeaten on nine and five respectively. The visitors won the first match by an innings and 63 runs at the same venue. The teams will now face off in a five-match T20 International series, starting Saturday. All the matches will be played at St George's, Grenada. Catch match highlights and cricket scores of the second WI vs SA Test match here