When Sushma Swaraj Rescued Indian Girls From An Earthquake-Ravaged Land 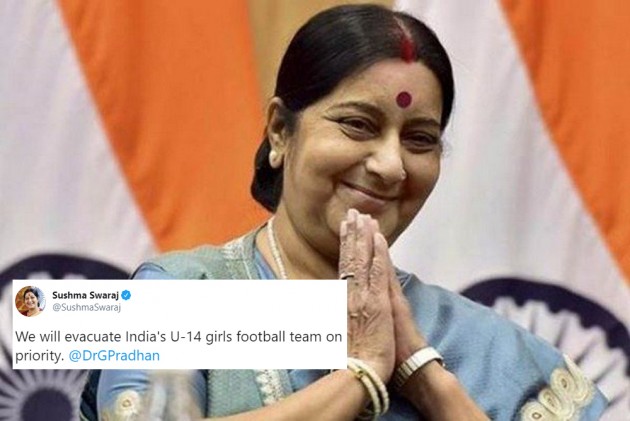 The India football federation on Wednesday remembered former External Affairs Minister Sushma Swaraj, who died on Tuesday. It was the minister's intervention that helped the national under-14 girls' team escape the ravages of the 2015 earthquake in Nepal.

Sushma Swaraj often came to the help of sportspersons caught in complex protocols ahead of overseas trips but what she did for the soccer girls was exemplary.

Eighteen players and five support staff members had travelled to Kathmandu to participate in an Asian Football Confederation (AFC) regional tournament. The players were practicing at Kathmandu's Dasarath Stadium, when the earthquake struck on April 28.

The Indian girls were gearing up for their third-place playoff fixture against Iran. Rattled by the earthquake, the girls and the coaching staff slept outside their rooms at Hotel View Bhrikuti in Kathmandu over fear of aftershocks.

It didn't take Sushma Swaraj much time, to make their safety her top priority.

We will evacuate India's U-14 girls football team on priority. @DrGPradhan

Planning an evacuation in a disaster-hit country is a tough task for any government. But India's friendly relations with Nepal and Sushma Swaraj's diplomacy skills formulated a plan. An Indian Air Force C-17 aircraft was pressed into service.

A total of 237 Indians (including the football team and support staff) boarded the aircraft in Kathmandu and were flown straight to Delhi!

Post the 2015 Nepal earthquake, @SushmaSwaraj's prompt action ensured the \uD83C\uDDEE\uD83C\uDDF3 U-14 girls' team was evacuated safely as soon as possible - just a small example of her empathy

"The earthquake in Nepal had a devastating effect. Our girls were stranded, and we were desperate to get them back to India. That’s when we tweeted to her from our official handle for help. She responded back assuring assistance, and entire squad travelled back safely in an Indian Air force plane", said AIFF General Secretary Kushal Das.

Sushma Swaraj was laid to rest on Wednesday evening.