Who Will Replace Quique Setien As Barcelona Head Coach?

Change is afoot at Barcelona, with coach Quique Setien likely to be gone soon. Here are some of the leading candidates to replace him 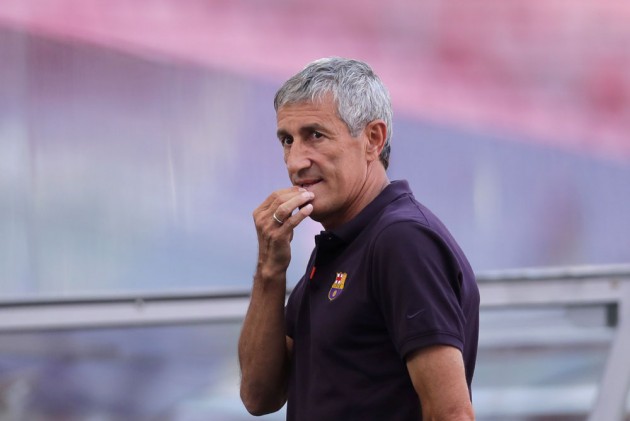 "Nobody is safe," declared Gerard Pique after Barcelona were humiliated by Bayern Munich in their final match of a long, long season. (More Football News)

The defender was very clear that changes must be made in the wake of an 8-2 battering in the Champions League quarter-finals.

President Josep Maria Bartomeu is expected to chair an extraordinary board meeting on Monday, when the dismissal of head coach Quique Setien appears likely to be ratified.

Barca's problems stem far beyond the man in charge of the first team, but Setien looked powerless in the dugout in Lisbon on Friday and is the first obvious departure as part of a top-down clear-out at Camp Nou.

Appointing a replacement is complicated by next year's presidential elections. Assuming Bartomeu does not heed growing calls to step aside, he will be in power for at least another 10 months. That means any coach who comes in now could find himself supplanted by the preferred choice of the next president.

With that in mind, here are six of the firm favourites to take over from Setien.

The favourite in many quarters, former Tottenham boss Pochettino could be a hugely tempting - and low-cost - choice.

The Argentinian, who left Spurs last November five months after reaching the Champions League final, has softened his stance on coaching Barca after previously declaring he could never take the job due to his allegiance to Espanyol.

Barca would represent by far the biggest job of his coaching career and the sheer challenge of getting them back on track could appeal to Pochettino, who turned Spurs into Premier League title challengers and top-four regulars over five years.

There are reports, however, that Pochettino's appointment could be a majorly divisive move, given his previous comments about Barcelona.

Barca's former captain turned down the coaching job in January when Ernesto Valverde was sacked, and he may think the time is still not right to take the reins.

The Catalans would need to buy out his deal with Al Sadd as well as convince Xavi to come back, plus there are political complications, with presidential challenger Victor Font declaring the former Spain star would be his choice in 2021 if he wins the election.

Still, there are few who better understand the 'Barca DNA', he is adored by the fans and, crucially, he could be the man to convince Lionel Messi to stay.

Another unattached option, Allegri has a commendable pedigree from his time with Milan and Juventus. Six Serie A titles, seven domestic cups and two Champions League finals in the past decade give Allegri a CV to rival any candidate.

He would certainly bring an uncompromising authority to the dressing room, as well as vast experience, but the 53-year-old could well be put off by the complications of those elections, especially given other leading clubs such as Paris Saint-Germain and Inter are said to be interested if they make a change.

Kluivert represents one of Bartomeu's more sensible possible appointments given he would probably accept the job despite the uncertainty of next year.

The former Barca striker is currently head of youth football at Camp Nou, and that is a role to which he could return if the head coach position became untenable in 2021.

He is another who understands the club well, would presumably be more than happy to promote youngsters to the first team, and he learned some of his coaching craft at the right hand of Louis van Gaal with the Netherlands national team.

Another former Barca star who knows only too well the demands of the club, Koeman also spoke with them about replacing Valverde only to turn them down.

Like Xavi, Koeman is committed to his present project, which is to lead Netherlands at Euro 2020. With that tournament having been pushed back to next year due to the coronavirus pandemic, the 57-year-old would appear unlikely to quit his national team now for the sake of a potential short-term posting at his old club.

Like Kluivert, Pimienta represents an internal candidate who would likely be unmoved by the looming elections.

A former academy player who made one appearance for the senior side, Pimienta has been coaching at La Masia since 2001 and took charge of the B team two years ago.

It would be unfair to expect him to become the new Pep Guardiola or Luis Enrique, who also honed their first-team credentials with the B team, but the 46-year-old would likely be a popular choice for the new generation of talent breaking through, even if the appointment lasted only until next year.