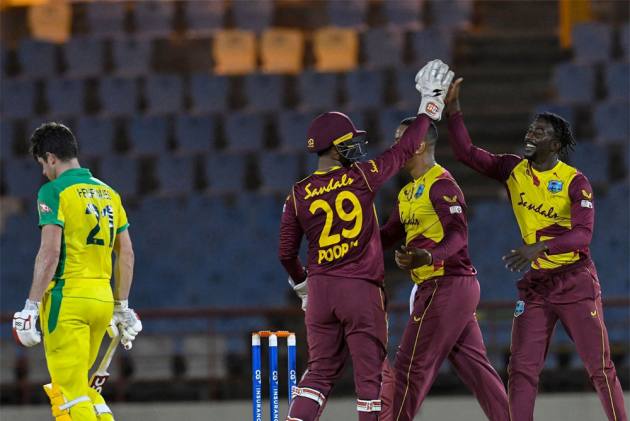 Chris Gayle was quiet but he had the last laugh. The Universe Boss clean-bowled Josh Hazlewood to wrap up the proceedings at Gros Islet, St Lucia on Sunday, thus giving West Indies a 56-run win over Australia in their second T20 International for a 2-0 lead. Windies had won the series opener by 18 runs at the same venue a night before with pacer Obed McCoy winning the man of the match. (More Cricket News)

This time, the win was set up by Shimron Hetmyer, who smashed 61 off 36 balls to help Windies post a big total of 196/4. Aussie captain Aaron Finch won the toss again and once again opted to bowl first.

Lendl Simmons scored 30 of 21 even as Ashton Agar got the wicket of Andre Fletcher, bowled, in the third over. Windies then lost Gayle (13 off 16) to Mitchell Marsh. But Hetmyer and Dwayne Bravo (47 off 34) and Andre Russell (24 off 8) hit ten sixes and five fours between to demolish the Aussie attack. Mitchell Starc ended up conceding 49 runs from his four overs without a wicket.

The chase never got off to a start with Sheldon Cottrell and Fidel Edwards getting the wickets Matthew Wade (0 off 2) and Finch (6 off 8) early, in the first and fourth overs respectively.

Marsh played a good knock of 54 off 42, but other Aussie batsmen failed to mount a serious challenge against the Windies' attack, brilliantly managed by stand-in skipper Nicholas Pooran. The second-highest scorer in the innings was Moises Henriques, who hit 19 off 21.

Hayden Walsh took three wickets for 29, but the man of the match award was won by Hetmyer.