Virat Kohli made 76 and Mayank Agarwal contributed 55 as India were 264/5 at stumps on Day 1 of the second Test against West Indies at Kingston, Jamaica on Friday. 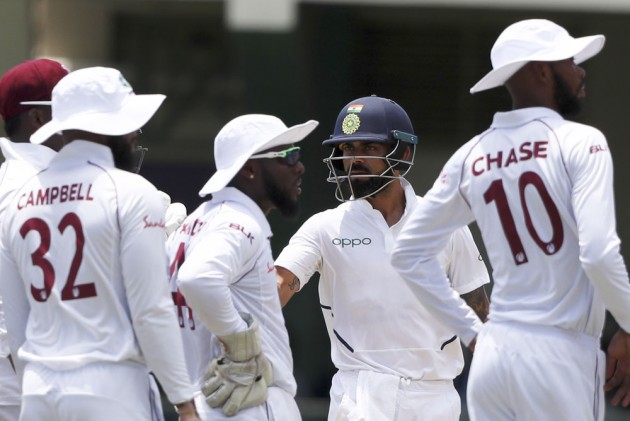 Captain Virat Kohli's fighting 76 and opener Mayank Agarwal's half-century helped India reach 264 for 5 on Day 1 of the second Test to take a slight edge over the West Indies at Kingston, Jamaica.

Put into bat on a tricky Sabina Park pitch, India were reduced to 46 for 2 in the opening session of their second ICC World Test Championships match but Kohli and Agarwal (55) work hard to rebuild the innings with a 69-run stand for the third wicket.

Kohli then had another 49-run partnership with first Test centurion Ajinkya Rahane (24) from 19 overs for the fourth wicket as India picked up the scoring rate in the second session which saw 85 runs being added from 29 overs.

But the two big wickets -- that of Kohli and Rahane -- in the final session put the brakes on India just when the visiting team was beginning to consolidate and push to a position of strength. Kohli faced 163 deliveries from which he hit 10 boundaries.

At the draw of stumps, Rishabh Pant and Hanuma Vihari were batting on 27 and 42 respectively, having stitched 62 runs from 17.5 overs for the unfinished sixth wicket. A lot will depend on the duo whether India can post a big total on the second day or not.

Pant, who has a tendency of throwing away wickets, was batting sensibly during his 64-ball unbeaten knock, hitting two fours and a six while Vihari was going strong in his 80-ball unbeaten innings which had eight boundaries in it.

Kohli, who worked hard in the first and second sessions, was beginning to impose himself on the West Indian bowlers and looked set for a bigger innings. But he fell to a peach of a delivery bowled by his West Indian counterpart Jason Holder.

The delivery, on a perfect length, pitched around the off and jagged away enough to take the outside edge of Kohli's bat and go through to the keeper.

Also Read: Rohit Has To Wait For A Spot In Test Team, Says Gambhir

The Indian captain was a bit lucky when on 55 as replays suggested he could have been out in the 62nd over bowled by Kemar Roach (1/47) but the West Indies had exhausted their quota of two reviews by then.

Rahane was out in the first over after tea as he dangled his bat outside off-stump for Jahmar Hamilton to take the catch. The India vice-captain was quite at ease during his stay at the middle but could not convert the start this time.

For the West Indies, Holder produced a brilliant pace-bowling spell by taking three wickets for 39 runs.

It was opener Agarwal who laid the foundation of the Indian fightback with a solid batting display. Playing in his fourth Test, the 28-year-old reached to his fifty as he edged a Roach delivery to the boundary ropes.

Agarwal fell inside the first hour of the post-lunch session after scoring his third career half century. His cut shot in the 41st over went straight to first slip fielder Rakheem Cornwall. His 55 came from 127-balls from which he hit seven boundaries.

Kohli took time to settle down as he took 16 balls to open his account during the morning session. He was tested by the tight bowling from the West Indians, especially by debutant off-spinner Cornwall (1/41).

The Indian captain gained in confidence as the match wore on and he hit two exquisite cover drives towards the end of the second session. He reached to his 22nd career half century off a single in the 55th over bowled by Shannon Gabriel.

Earlier, India laboured their way to 72 for 2 from 30 overs after opener KL Rahul (13) and Cheteshwar Pujara (6) were dismissed cheaply in the opening session on a pitch which had some grass on it.

Holder introduced himself in the seventh over and immediately got the breakthrough by having the wicket of Rahul to break the 32-run opening stand.

Pujara struggled again as he took 15 deliveries to open his account and was finally out for 6 (off 25 deliveries), giving Cornwall his first Test wicket.