After Fawad Alam's jaw-dropping catch on Day 4 of the second Test against West Indies, Pakistan's Imran Butt treated fans with another stunner 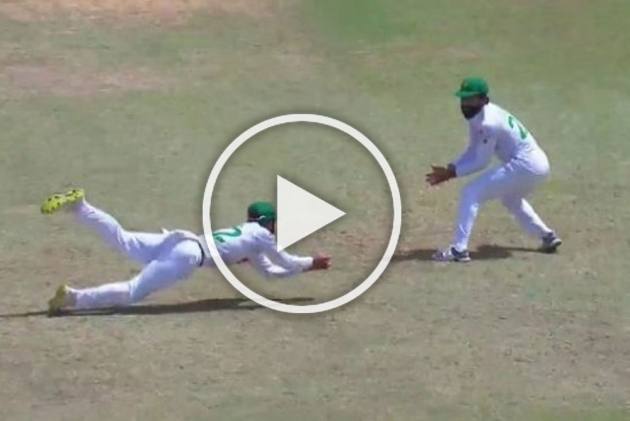 Young Pakistan batsman Imran Butt got to play his part as Pakistan inched closer to a series-levelling win in the second Test against the West Indies at Sabina Park, Kingston, Jamaica on Tuesday. At Lunch on Day 5, Windies were 113/5 (51), still needing 216 runs after Pakistan set a 329-run target. Windies won the first Test by one wicket.

Pakistan, who haven't lost a Test series to the Windies in over two decades, started the final day on a rousing note with man-of-the-match candidate Shaheen Afridi removing Alzarri Joseph for 17 runs. Then, fellow pacer Hasan Ali removed Nkrumah Bonner (2) and Roston Chase (0) in quick succession before Nauman Ali claim the wicket of Jermaine Blackwood.

But the best of the lot was the wicket of dangerous Chase, caught at second slip by Butt. Watch the catch here:

Imran Butt on his debut. So far he's played 6 games, taking 16 catches, and most of his catches are stunners. âÂÂ¤ï¸ÂÂ#WIvsPAK pic.twitter.com/C4Zz2OztNv

Butt, a top-order right-handed batsman from Lahore, made his Test debut in January earlier this year in a match against visiting South Africa.

In the second innings of the match, he scored 37 runs to give Pakistan a start. The visitors subsequently declared at 176/6 to give their bowlers enough overs to dismiss the Windies.