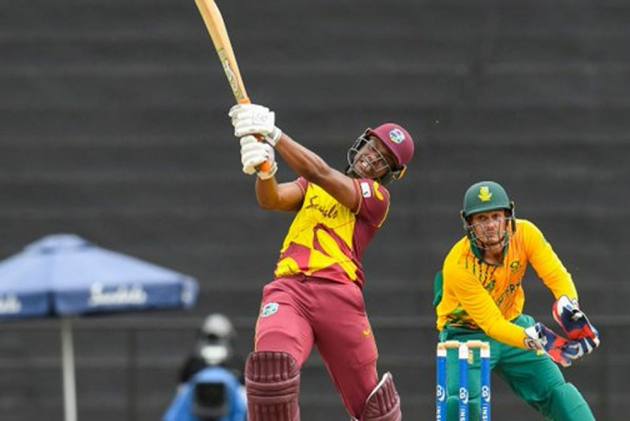 The West Indies hit back with a sensational eight-wicket win over South Africa in the first T20 International game at St George's National Cricket Stadium on Saturday. (More Cricket News)

Days after suffering back-to-back Test defeats at the hands of visiting Proteas in St Lucia, the Windies started the Grenada stop with an almost perfect performance.

Fielding an ensemble cast in the 20-overs format, Windies chased down South Africa's below-par total of 160/6 with five overs to spare. In fact, they needed only four batsmen against a much-vaunted bowling attack led by Kagiso Rabada.

And doing the damage was Evin Lewis, who hit a 35-ball 71. His opening partner Andre Fletcher scored 30 off 19 before getting run out as they laid the foundation with an 85-run stand.

With Lewis in a murderous mood, South Africa captain Temba Bavuma took a gamble by introducing Reeza Hendricks in the 11th over, but the part-time spinner ended up leaking 21 runs, thanks to three sixes.

Bavuma used six bowlers, but Tabraiz Shamsi was the only one who got a wicket (1/27). Rabada, Lungi Ngidi, Anrich Nortje and George Linde all looked out of their depths against the Windies assault.

There were 15 sixes in the innings, as against five from the Proteas.

Some of the biggest names in the T20 circuit, many of them plying their trades in various leagues around the world, coming together for Windies was a sight to behold.

Earlier, Kieron Pollard won the toss and opted to bowl first. The Proteas got off to a steady start with openers Hendricks (17 off 11) and ever-reliable Quinton de Kock (37 off 24) adding 33 in 3.4 overs for the first wicket. Fit-again skipper Bavuma scored 22 off 20 even as Rassie van der Dussen held the innings together with a 38-ball knock which yielded 56 runs.

But the visitors couldn't shift the gear and ended up setting a 161-run target against an all-star batting line-up.

Fabian Allen (2/18) and Dwayne Bravo (2/30) got a couple of wickets, while Jason Holder and Russell claimed one each.

The commanding win augurs well for the Kieron Pollard-led side, which will enter the T20 World Cup later this year in the United Arab Emirates as one of the favourites.