South Africa gave West Indies a target of 324 which may be beyond the reach of the hosts whose best total of the series so far is 162. 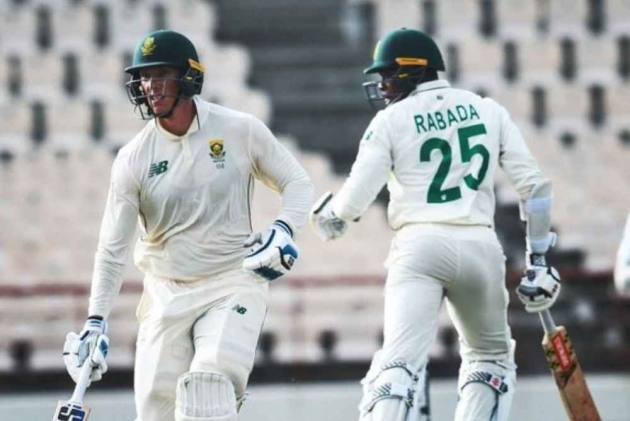 The West Indies' hopes of saving their two-Test series against South Africa rose and fell on the third day of the second Test, subsiding in the face of a dogged half century from Rassie van der Dussen. Highlights | News

Leading by 149 after the first innings, South Africa slumped to 73-7 in the second on Sunday as it struggled against quality fast bowling from Kemar Roach and Kyle Mayers.

But van der Dussen made an unbeaten 75 and shared a vital 70-run partnership for the eighth wicket with Kagiso Rabada, who made 40 from 48 balls, to diminish the home team's chances.

South Africa was finally out for 174, building its lead to 323 which may be beyond the reach of the West Indies whose best total of the series so far is 162.

Openers Kraigg Brathwaite (5 not out) and Kieran Powell (9 not out) batted out the last six overs of the day in fading light to guide the West Indies to 15 without loss at stumps when they still trailed by 309.

The task of chasing that total in the fourth innings is difficult on a wearing pitch, especially for a West Indies team whose batsmen have struggled throughout the series. The home side might also be without Roston Chase who has a leg injury.

But Brathwaite will take heart from the memory of the West Indies' successful chase for a similar total against England at Headingley in 2017, when he scored 134 in the fourth innings.

Van der Dussen showed Sunday that runs can be scored with application. He batted through more than 40 overs to steady the Proteas' innings.

"I was a bit of a hiccup at the start of our innings," van der Dussen said.

"We're happy with the position we're in now. It would have been nice to have a wicket tonight but we'll be backing ourselves to get the job done tomorrow."

Roach and Mayers swung the Dukes ball in mostly overcast conditions as the West Indies romped through South Africa's top and middle order on a rain-affected day. Roach took 4-52 and Mayers 3-24.

Only 24 overs of play were possible before tea because of the weather. Rain wiped out the whole of the first session on Day 3 in St Lucia and returned in the afternoon to force an early end to the second session.

South Africa began its second innings Sunday after dismissing the West Indies for 149 on the second day, in reply to its own 298.

The West Indies made inroads straight away when Kemar Roach removed Aiden Markram to an edge to the slips in the first over of the innings. Roach also sent South Africa captain Dean Elgar back for 10.

Jason Holder snatched the crucial wicket of Quinton de Kock and the West Indies players were clearly delighted when de Kock edged to wicketkeeper Joshua Da Silva for a duck. De Kock made 141 not out and 96 in his two other innings this series.

Holder pulled off the catch of the series to dismiss Keshav Majaraj, hurling himself full-length to his right at second slip to snatch a brilliant one-hander.

South Africa won the first Test, also in St Lucia, by an innings and 63 runs. AP