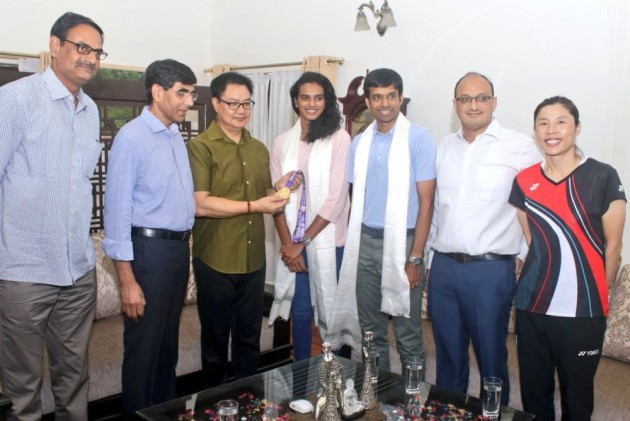 The Olympic silver-medallist, who outclassed Japan's Nozomi Okuhara 21-7, 21-7 in a lop-sided final of the big event in Basel, Switzerland on Sunday, was mobbed at the airport after she touched down with national coach Pullela Gopichand by her side on Monday (August 26) night.

Despite the hectic schedule she has endured, the 24-year-old had a smile on her face as she acknowledged supporters and the media at the airport.

"I am really happy, I am very proud of my country. It's a much-awaited win and I am very happy about it," Sindhu said in response to questions that were thrown at her almost at the same time.

"This is my answer to the people who have asked me questions over and over. I just wanted to answer with my racket and with this win - that's all.

"I felt really bad after the first World Championships final and last year I was angry, I was sad. I went through all my emotions, asking 'Sindhu, why can't you get this one match?' but Sunday came and I told myself to play my game and not worry - and it worked out.

"I will work more hard and win many more medals," she added.

The Hyderabadi has had little time to reflect since her historic triumph. She had a breakfast meeting with Sports Minister Kiren Rijiju.

Sindhu was also asked about the moment she got emotional after the medal distribution ceremony. The five-time world medallist had tears in her eyes when the national anthem played. She had claimed silver in the past two editions, besides a couple of bronze medals earlier.

"I had tears and there were a lot of emotions, it was a great moment for me. Thanks to all my fans for your blessings, your blessings have brought me here," she said.

"I would like to thank my coaches Gopi sir and Kim (Ji Hyun). They have put in a lot of effort and done a few changes in my game," she added.