Vandeweghe, 29 won her first-round match at Wimbledon — less than a year after severing two ligaments and a nerve in her left hand. 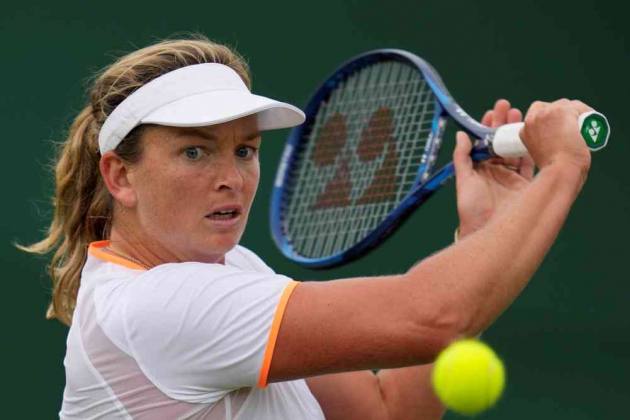 Just holding onto a tennis racket can be painful for CoCo Vandeweghe these days. Yet there the 29-year-old American was on Wednesday, winning her first-round match at Wimbledon — less than a year after severing two ligaments and a nerve in her left hand. (More Sports News)

How she got hurt: using a container that wasn't microwavable when she heated up a bowl of soup.

“It exploded in my hand,” Vandeweghe said, then held up her hands on a video conference at the All England Club to show how her left fingers don't quite line up straight after surgery in August 2020.

“You can see it's a little crooked.”

Two-time Grand Slam semifinalist Vandeweghe beat qualifier Olga Govortsova of Belarus 6-4, 6-2. It was Vandeweghe's first win at any major tournament since the 2018 French Open; she was diagnosed with a rare chronic pain condition in her right foot later that year.

Once a member of the Top 10, Vandeweghe is now No. 163 in the WTA and used a protected ranking to get into Wimbledon's main draw.

She said she couldn't even grip a ball with her left hand until November.

Vandeweghe is right-handed but uses both hands for her backhand.

“I'm doing rehab, still, every day on it,” Vandeweghe said.

The problems with her foot started during Wimbledon in 2018 but she didn't realize until much later how serious it was.

“Kind of conquering demons here at Wimbledon,” she said.

“That was kind of the start and the catalyst of my injury life. I definitely had a big smile on my face after today's win.”

The foot injury meant Vandeweghe wasn't sure if she would even walk normally again and made her question whether she wanted to continue playing tennis.

The hand injury, in some ways, has been easier to deal with.

“With my hand, I knew there'd be times when it wouldn't feel great. Like when it's cold, like today, it hurts, but it doesn't hurt that bad. It's just, Don't be a wuss about it,' I guess,” Vandeweghe said.

“The biggest issue was the nerve that I had severed, so that every time a vibration would hit the racket, it just zinged me. I was getting shocked every time.”

She said she's “not even close” to being back to her best but is learning to live with the pain when playing.

“It's definitely one of those things where some days you forget about it," Vandeweghe said, "and other days you see me shaking out my hand just because the nerve is just freaking out.”

Right after Matteo Berrettini arrived at the All England Club, he ran into three-time Wimbledon champion Boris Becker.

Now we have something in common.'”

They do? Yes, they do: Berrettini tuned up for Wimbledon by winning the Queen's Club grass-court tournament in London in June. The last man to win that event in his debut there? Why, none other than Becker in 1985 — and he then went on to claim the trophy at the All England Club.

“I was like, Yeah, I wish I have everything in common, like all the titles and stuff. I'll try to get there,” said Berrettini, a semifinalist at the 2019 U.S. Open and quarterfinalist at this year's French Open.

“He also told me I had to keep my mind clear to have a long run here. I'll try to do that.”

Everything changes for Sam Querrey when he gets to play on grass courts, it seems.

When that surface was skipped by the tennis tours in 2020 because of the pandemic, Querrey ended the year on a five-match losing streak. He then began 2021 by going 2-6 in matches on hard and clay courts.

And then? Well, then the time for the grass finally arrived, and the 33-year-old American is thriving.

“The last year — minus the last two weeks — has been tough,” Querrey said after dropping Carreño Busta's career mark at Wimbledon to 0-6.

The 6-foot-6 Querrey hit 22 aces, was only broken once and generally played like someone who has been ranked No. 11 and was a 2017 semifinalist at the All England Club. He beat then-reigning champion Andy Murray in the quarterfinals that year, and then-reigning champion Novak Djokovic in the third round in 2016.

“It's pretty natural,” he said about getting on the grass. “The more you play on it, for the older guys, it's always a little easier. Grass for people that play on it for the first time, the younger guys, it's a tough surface to adjust to as a young player.” (AP)