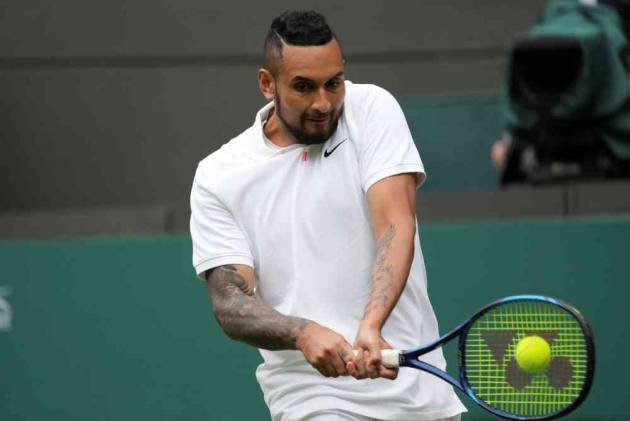 Nick Kyrgios was back on the scene at Wimbledon, offering his inimitable brand of showmanship and shot-making, with tennis by turns exhilarating and exasperating. (More Sports News)

Even if he hadn't played on tour at all since February, even if he came in with a grand total of 15 matches of competition over the past 18 months, Kyrgios showed he still can deliver the goods when he puts his mind to it.

Just a handful of days after finishing the lengthy trek from the comforts of home in Canberra, Australia, to the grass courts of the All England Club — leaving the carefully calibrated practice and prep to others — Kyrgios made quite a return, edging No. 21 seed Ugo Humbert 6-4, 4-6, 3-6, 6-1, 9-7 on Wednesday in a match suspended at 3-all in the last set a night earlier because of an 11 p.m. local curfew.

“Not bad for a part-time player,” a smiling Kyrgios told the crowd at No. 1 Court, letting them know his plans for the rest of the day included playing video games with his girlfriend at the tournament's “bubble” hotel.

His was one of more than two dozen first-round contests that wound up finishing on Day 3 after rain Monday and Tuesday scrambled the schedule and contributed to the slickness of the courts that left some players sliding and stumbling.

So while 19-time Grand Slam champion Novak Djokovic — who made only six unforced errors and beat two-time major finalist Kevin Anderson 6-3, 6-3, 6-3 — and others such as Andy Murray, Frances Tiafoe, Sebastian Korda, Fabio Fognini, Garbiñe Muguruza, Sloane Stephens and Iga Swiatek reached the third round on a chilly, overcast and busy day, some were just making their way into the second: Aryna Sabalenka, Jelena Ostapenko, Victoria Azarenka, Marin Cilic, Felix Auger-Aliassime and Taylor Fritz, among them.

“But considering everything, I feel all right. I feel good.”

Sofia Kenin, the Australian Open champion and French Open runner-up in 2020, and 41-year-old Venus Williams, who won five of her seven major championships at Wimbledon, lost in the second round. Kenin's departure means seven of the 11 highest-ranked women are now missing from the bracket, including defending champion Simona Halep and Naomi Osaka — who both withdrew before the tournament — and Serena Williams, who injured her right leg when she slipped during her match Tuesday and couldn't continue.

Djokovic dealt with some less-serious footing issues but otherwise was pretty close to impeccable against Anderson, who smacked 41 aces in his opening match but managed only 11 on Wednesday.

“Still a long way to go. Hopefully, I can go very deep in the tournament. That's the goal,” said Djokovic, who seeks a third Wimbledon trophy in a row and sixth overall and is now 16-0 in Grand Slam matches in 2021.

“But I'm very pleased with the way I've been playing so far.”

As was Kyrgios, for the most part, wagging his racket to ask the fans for more noise as he strutted around after his best shots.

Then again, he also shook his head or told himself he was “rubbish” after many a miss.

Here's something else he seems to do quite a bit: store up every negative thing he reads or hears about himself and either use it as motivation or merely mock it.

“Look, a lot of people were telling me: There's no chance. There's no point in you going with that short preparation.' I was hearing a load of things. (Someone was) telling me, There's no chance you can come off the couch and compete at this level,'” said the 26-year-old Kyrgios, whose 2014 debut at Wimbledon included a win against Rafael Nadal on the way to the quarterfinals, a round he hasn't reached since at the tournament.

“I'm like, Dude, I know my game.' I know how to play on grass. I'm not scared of anyone in the draw. I know if I believe and I'm feeling good mentally, like, I know what I'm capable of,” continued Kyrgios, who's been ranked as high as No. 13 but is No. 60 now after all of that inactivity.

“I've been playing this sport since I was seven years old. ... I'm going to serve big and play big and just compete.”

Tongue firmly in cheek, he's likened this trip abroad to a vacation, and as he spoke to the media via video conference, Kyrgios leaned back, his head tilted to rest against his hands — a pose fit for a beach chair.

Against Humbert, whom he also beat in five sets at Melbourne Park this year, Kyrgios did more than just "serve big and play big."

Sure, there were the 23 aces. And the flashy forehands he flicked with no notice to end points. And, yes, naturally, the ill-advised trick shots, like the no-good-reason-for-it, between-the-legs floater on set point for Humbert — on set point! — that contributed to giving away the third.

Then again, maybe that's part of the charm with Kyrgios: You never know what you're going to get, so better tune in to find out.

Actually, he showed impressive patience during lengthy exchanges at the baseline in the late going, willing to wait out a point until his foe would err. Indeed, Kyrgios won 9 of 14 points that lasted at least nine strokes. Plus, he was the one who got the service break in the penultimate game to seize control.

That checks out. Just ask him. (AP)