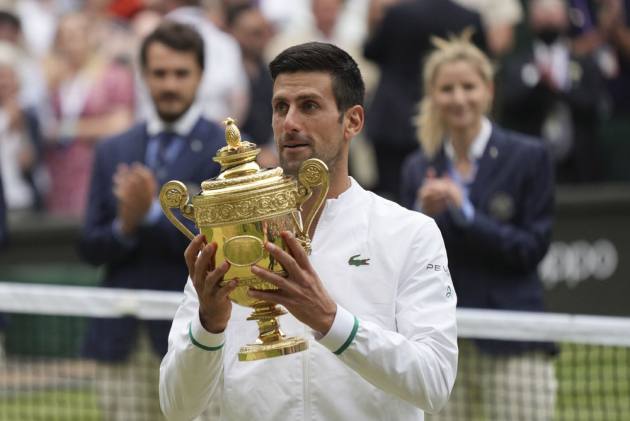 Two-time defending champion Novak Djokovic fought back from a set down to beat Matteo Berrettini in the Wimbledon 2021, Gentlemen's singles final at SW19, London on Sunday. The win, his 21st in a row at All England Club since the start of the 2018 tournament, elevated him to tennis royalty -- with 20 Grand Slam singles titles. Simply put, he now shares the record for most Majors by a man with Roger Federer or Rafael Nadal. (More Tennis News)

But Djokovic, who entered the title clash against the unheralded Italian with 20 wins in a row in all Grand Slam matches since the start of this season, struggled to keep pace with his younger opponent. He lost the first set 6(4)-7 in a tie-breaker despite leading 4-1. Berrettini, 25, broke back in the ninth game to make it 5-5. The set lasted one hour and 12 minutes.

As witnessed over the course of Wimbledon's grass history, Berrettini's booming serve and powerful forehand rattled Djokovic. But that's only one part of the story as Nole fought back with his indefatigable defence, which has become a trademark for the Serbian world number one. And Djokovic did it in style, breaking the world number nine twice to race to a 3-0. It then became 5-2, but Berrettini threatened to repeat his first-set fight back by breaking Djokovic in the eighth game. This time though, Djokovic was more than prepared and served out the set. The set lasted 43 minutes.

The third followed the same script with the 34-year-old breaking Berrettini in the third game. Djokovic, however, survived a tense sixth game, saving two break points. The Serbian won the set 6-4 in 48 minutes to inch closer to his sixth Wimbledon title.

Competing in his 30th Major final and seventh at All England Club (equalling Boris Becker, Arthur Gore and Pete Sampras on the all-time list), Djokovic was the epitome of mental fortitude as he played the waiting game, and Berrettini blicked first. In a repeat of their French Open quarter-final, Djokovic broke Berrettini in the seventh game for a 5-3 lead.

Serving to stay in the match, Berrettini bravely saved two match points but it was too little, too late. The set lasted 44 minutes and the match, three hours and 27 minutes.

After collecting trophies on the hard courts of Melbourne Park in February, and the red clay of Roland Garros in June, Djokovic now set himself to complete a rare calendar-year Grand Slam, with only the US Open remaining. Then, there is also the chance of becoming the first male to complete the 'Golden Slam' in the Tokyo Olympics.

No man has pulled off that three-title stretch within one year, let alone all four, since the great  Aussie Rod Laver won the real Grand Slam in 1969. The last one to do so was German great Steffi Graf, who is also the only player to date to complete the 'Golden Slam' in 1988.

For the record, both Federer and Nadal had come close to winning all four Slams in a calendar year. The Swiss great had swept all but the French Open in 2004, 2006 and 2007, while the 'King of Clay' crashed out early in Melbourne in 2010 after.

For Berrettini, a win against Djokovic would have made him the first Italian man to lift a Grand Slam trophy since Adriano Panatta's 1976 triumph at Roland Garros, and the first to do so at Wimbledon.

After an injury-affected 2021 season, Berrettini sure looked like playing at his best at the All England Club. He did manage to take a set from Djokovic, who had only dropped one in this campaign, against British teenager Jack Draper in the first round.

But against Djokovic, who himself is chasing records, of a different level, Berrettini found his best efforts not enough.

Berrettini had previously featured in the 2019 US Open semi-finals (lost to Nadal), and was looking for a sixth tour-level trophy, and first Slam.