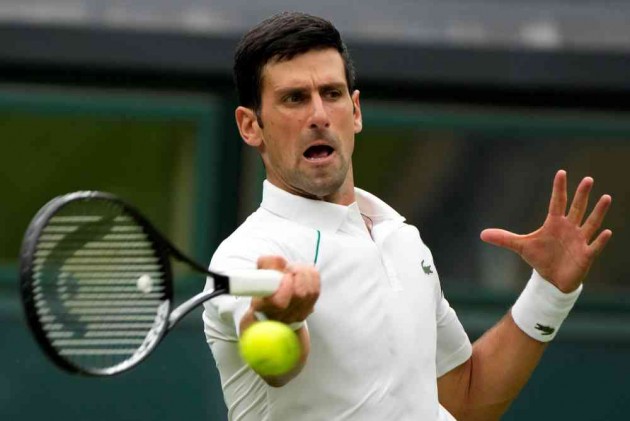 Wimbledon returned on Monday after being called off in 2020 because of the pandemic, and so much felt rather familiar at the All England Club, from the rain that disrupted the schedule to the victory for Novak Djokovic. (More Sports News)

Much like the delays to competition around the grounds — it took about 4 1/2 hours to begin play on the outside courts; more than a dozen matches were postponed entirely — Djokovic got off to a slow start in his bid for a record-tying 20th Grand Slam title and sixth at Wimbledon.

The defending champion dropped the opening set against Jack Draper, a 19-year-old wild-card entry from England who is ranked 253rd, before eventually showing his best tennis under the Centre Court roof and winning 4-6 6-1 6-2 6-2 with the help of 25 aces.

Djokovic is halfway to a calendar-year Grand Slam, after trophies at the Australian Open in February and the French Open two weeks ago. The man he came back to defeat in the final at Roland Garros after dropping the first two sets, No. 3 seed Stefanos Tsitsipas, quickly was bounced out of the All England Club, losing to 57th-ranked Frances Tiafoe of the United States 6-4 6-4 6-3 in just over two hours at No. 1 Court.

Tiafoe had been 0-11 against opponents ranked in the Top 5.

"That guy is special. He's going to do a lot of great things. Win a ton of Grand Slams," Tiafoe said about Tsitsipas, then broke into a wide smile and added: "But not today."

In the first women's match completed, Aryna Sabalenka — who is seeded No. 2 after defending champion Simona Halep and four-time major champ Naomi Osaka pulled out — advanced with a 6-1 6-4 victory over qualifier Monica Niculescu. Other winners included 2017 champion Garbiñe Muguruza, No. 23 Madison Keys and No. 32 Ekaterina Alexandrova.

Still, at least there was tennis being played at the venue that hosts the oldest Grand Slam tournament.

"It feels great seeing everyone and being back at probably the most special, most sacred, tennis court in the world," the top-seeded Djokovic said.

"Alongside many other players, I was very sad last year that Wimbledon was canceled," he said, referring to the first time it wasn't contested since World War II.

"They were very difficult times for everyone, but I'm really glad that the sport is back. Hopefully you guys have enjoyed it and you will enjoy it in the next couple weeks."

The coronavirus still looms over the event.

Capacity around the grounds is restricted to 50% now; that will rise to 100 per cent for the singles finals on the fortnight's closing weekend. Fans must wear masks around the grounds (although not while watching a match) and show proof that they either are fully vaccinated or had COVID-19 in the past six months. All players and their entourages must stay at a designated London hotel, where they take regular tests and are subject to contact tracing.

Britain's only seeded woman in singles, No. 27 Johanna Konta, had to withdraw on Sunday night because she was told to self-isolate for 10 days after one of her team members tested positive for COVID-19.

Before Djokovic and Draper opened the proceedings in the main stadium — an honor reserved for the previous year's men's champion — there were announcements over the loudspeakers welcoming “special guests in the Royal Box,” including someone involved in vaccine development and frontline medical workers.

That was met with a standing ovation, just the first of the day.

Another arrived when Draper grabbed the first set, surely to the surprise of his country, to Djokovic and the kid himself.

It would have been so easy — so understandable, even — for Draper to be fazed by the moment and the opponent, the setting and the stakes right at the outset. This was his Grand Slam main draw debut, after all.

Djokovic took two tumbles onto his backside in the first set, losing his footing on the slick grass behind the baseline. This was his first competitive singles match on the surface since edging Roger Federer in the 2019 final after saving two championship points.

"To be honest, I don't recall falling this many times on the court," Djokovic said with a laugh.

"Well, quite slippery, whether it's because the roof is closed or it was raining quite a lot the last few days, I don't know."

Draper broke for a 2-1 lead, helped by Djokovic's double-fault, missed forehand and flubbed volley, and held on for that set.

Djokovic accumulated seven break points in the initial set: one the first time Draper served, two the next time and four the fourth time, a game the left-hander escaped with the help of two aces in a row at 125 mph and 117 mph.

A 125 mph service winner gave Draper that set and he shook his racket, then pumped his right fist.
The crowd roared.