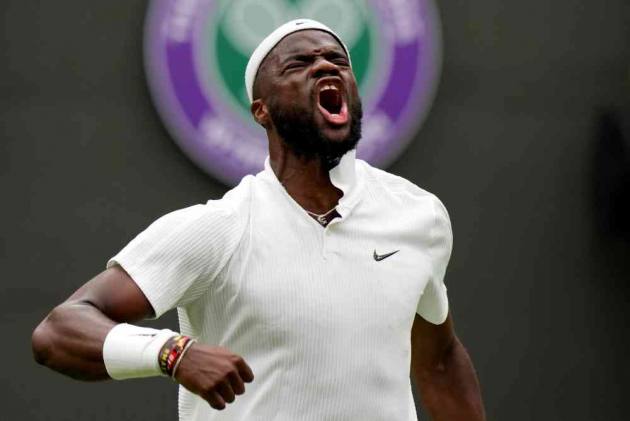 The Americans, both ranked outside the Top 50 at the moment, bumped into each other shortly before their matches against seeded opponents on Day 1 at the grass-court Grand Slam tournament.

“She was coming up; I was going to practice. I was just like, Sloane, I back you to win today. I'm not even worried about it,'” said Tiafoe, who went up against French Open runner-up Stefanos Tsitsipas at No. 1 Court.

“She's cracking up, laughing. She's like, 'Well, you better do the same thing.' I was like, Hey, don't worry about it.'”

Indeed, there was little to worry about. Both pulled off convincing victories.

“First thing I came off (court), seeing if she won. That made me even happier. I'm happy for both of us,” the 23-year-old Tiafoe said.

People forget, he said, that Stephens is a former US Open champion (2017) and French Open finalist (2018). Her best showing at Wimbledon was in 2013, when she reached the quarterfinals.

“She's one of the best girls on tour, arguably, when she's fully there. There's no gimmick. This is a fact,” he said of Stephens, a former Top 5 player now ranked 73rd.

The 28-year-old Stephens said reaching the fourth round at Roland Garros boosted her confidence.

“Even though obviously it didn't end the way I wanted it to, I was just feeling more like myself on court,” the Florida-based Stephens said.

Tiafoe should have plenty of momentum after his entertaining match against Tsitsipas in a test of desire — and hunger.

The 57th-ranked Maryland native applied pressure by charging the net, where he won 24 points. Tsitsipas acknowledged that this tactic gave Tiafoe a “psychological lead” and he cited bubble fatigue for a lack of motivation.

“I woke up this morning like, Yeah, I'm beating Stefanos,'” he said at his video conference, wearing a T-shirt with an image of Arthur Ashe in a fur coat.

Tiafoe's elaborate on-court victory celebration included rolling up his short sleeves, slapping his chest and mimicking eating from a bowl.

EQUAL TIME
Novak Djokovic says he would be happy to let the ladies go first.

In keeping with Wimbledon tradition, defending men's champion Djokovic played the tournament's opening match on Centre Court on Day 1. The defending women's champion — or a replacement, such as this year, when No. 1 seed Ash Barty replaces 2019 winner Simona Halep, who withdrew — opens the main stadium on Day 2.

But Djokovic said he would support sharing the honor by letting the defending women's champion go first every other year.

Sloane Stephens, the 2017 U.S. Open champion, said the tradition is outdated and times have changed.

She said women should continue to push for equality in court assignments, night match exposure and equal prize money at all tournaments.

“It's not going to happen overnight, obviously,” Stephens said.

“But we are working and doing the best we can to make sure that all of our players are spoken for and they have a voice and a seat at the table.”

The chief executive of the All England Club said Monday it was “not unexpected” that players would be forced to withdraw from the tournament because of coronavirus contact tracing.

The only seeded British woman in the singles draw, No. 27 Johanna Konta, pulled out Sunday night after she had to self-isolate for 10 days because a member of her team tested positive for COVID-19 that morning. Konta was a 2017 semifinalist at Wimbledon.

Another player, Frederik Nielsen of Denmark, was forced to drop out of men's doubles because he was a close contact of his coach, who tested positive Friday. Nielsen won the Wimbledon doubles championship in 2012.

“What's happening now is not particularly unexpected. It is nonetheless terribly sad for the players that it affects,” chief executive Sally Bolton said during a video conference with reporters.

“But this is something that we had planed for and is not particularly unexpected. We have the protocols and the controls in place.”

Bolton said that whether a person is fully vaccinated has no bearing on the requirement for isolation by anyone deemed a close contact.

She added that what happened to Konta on the eve of the tournament would have been handled the same way if a player were about to play in a semifinal or final.

“The rules are very clear. And there's no question about that. And so in terms of when that circumstance may or may not arise in the rest of the tournament, the rules are the same,” Bolton said.

“And that's not about us kicking anybody out of the tournament. That is the need for that player to withdraw because they have to isolate.”

All players and their team members are staying at one hotel in London.

“There is a very significant and robust testing regime for everybody that's in that bubble," Bolton said, "so we're very confident that if there's any positive cases in that, we will pick those up and be able to address that accordingly, as we have done with Jo and her support team.” (AP)