Wimbledon: Matteo Berrettini 'On The Right Road' After Loss To Novak Djokovic

Matteo Berrettini finished with a 57-31 edge in total winners, but he also made 48 unforced errors, more than twice as many as Novak Djokovic's 21 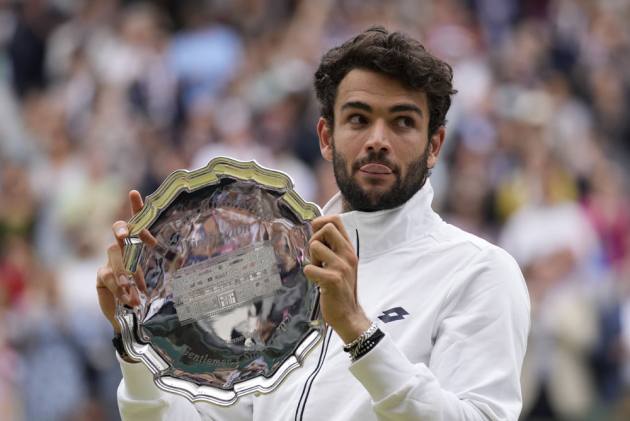 Matteo Berrettini's first Grand Slam final did not go as well as he hoped, of course, ending with a loss to No. 1-ranked Novak Djokovic at Wimbledon. (More Tennis News)

Still, Berrettini is sure Sunday's title match won't be his last at a major tournament.

“I went on court knowing that his strengths counteract my strengths. I knew I probably — no, definitely — needed to play a better match than I played today,” said Berrettini, a 25-year-old from Italy who was seeded seventh at the All England Club. “I don't think I'm saying something crazy if I say that he likely was the only player ... who could have beaten me in this tournament.”

Djokovic's 6-7 (4), 6-4, 6-4, 6-3 victory at Centre Court earned him a sixth championship at Wimbledon and 20th overall at a Slam, tying him with Roger Federer and Rafael Nadal for the most by a man in tennis history.

One key to the outcome: Djokovic's supremacy as a returner, which allowed him to prevent Berrettini from accumulating too many free points. Yes, he compiled 16 aces, but so many speedy deliveries that wound up as service winners against other opponents were put in play by Djokovic.

Berrettini finished with a 57-31 edge in total winners, but he also made 48 unforced errors, more than twice as many as Djokovic's 21.

“I need to learn how to deal with things, especially emotionally. When you know you do something well, and you face someone who is always there — it's like he's not bothered by it — that's not easy to handle,” said Berrettini, who noted that the thick tape wrapped on his left thigh was not a big deal.

“But the experience will help me. I'm convinced I will play other finals. I'm not saying it'll happen at the next Slam, but I'm on the right road.”

The result ended an 11-match winning streak, which came entirely on grass courts.

That included a run to the title at the Queen's Club event in London last month. Berrettini became the first player making his debut there to take home the trophy since Boris Becker in 1985, the year he won the first of his three Wimbledon trophies.

When Berrettini arrived at the All England Club, he ran into Becker — who recognized him. That was a pleasant surprise for Berrettini.

The past fortnight, though, made him fully believe that he belongs on the sport's biggest stages and one day will have his name etched on its most important hardware.

“Obviously for me it's been unbelievable week, two weeks. But I know that I can do it,” Berrettini said.

Djokovic made clear he agrees.

“I know it's not the best feeling, losing in the final, but I am sure there is a great career in front of you,” Djokovic told Berrettini during the trophy ceremony.

“It's just the beginning. I truly believe in that.”