Roger Federer wasted little time dismissing home hope Jay Clarke with a straight-sets win in the second round of Wimbledon on Thursday. 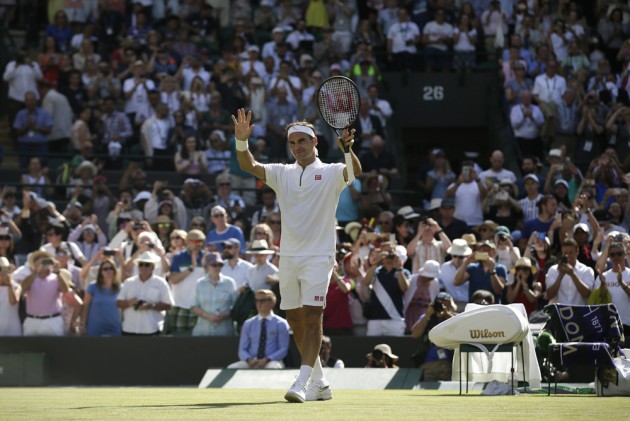 Roger Federer wasted little time dismissing the challenge of home hope Jay Clarke at Wimbledon on Thursday, recording a straight-sets win in the second round.

The eight-time All England Club champion triumphed 6-1 7-6 (7-3) 6-2 on No.1 Court, apparently suffering none of the mobility issues that hampered him in the early stages of his opening victory over Lloyd Harris.

Federer complained his "legs weren't moving" as he lost the opening set to Harris on Tuesday, but the Swiss raced out of the blocks against British number four Clarke.

The 20-year-old was quickly made aware of the scale of the task at hand, failing to win a point on the Federer serve before dropping his own following three double faults.

He finally got off the mark in game four and took that momentum into the next, applying sufficient pressure to force a couple of Federer errors that left the 20-time grand slam winner facing two break points.

A delicious flicked forehand and an ace soon snuffed out the threat and Federer, competing in a record 21st Wimbledon, went on to comfortably seal the opening set inside 28 minutes.

Clarke, ranked 169th in the world, grew into the contest in the second set, honing his service game and varying his returns to make Federer work a little harder, both physically and mentally.

However, after dumping a sitter of a volley into the net to fall a mini-break down in the tie-break, Federer upped the tempo to reel off six of the next seven points, wrapping up the set with an ace down the middle.

That broke Clarke's spirited resistance and the third set saw normal service resume, Federer taking the first two games without dropping a point and ultimately getting the job done in a total match time of one hour and 37 minutes.