Michael Clarke was among the pall-bearers at Phillip Hughes' funeral. Hughes death devastated Clarke, who was the skipper of the Australian national cricket team at that time 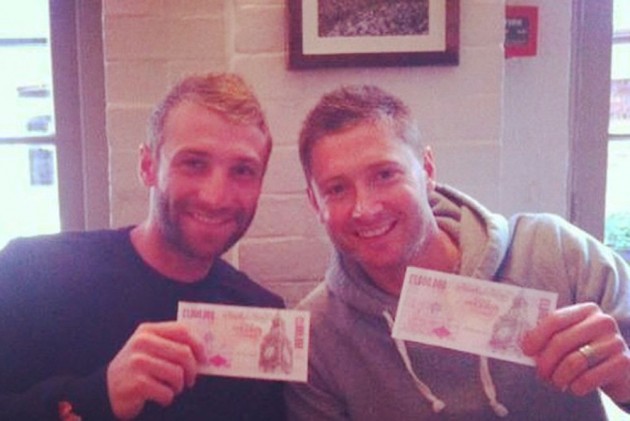 "How I wish, how I wish you were here!" That's how Pink Floyd sang in their tribute song to founding member Syd Barrett, and ever since it's release as the title track of one of the greatest albums with the same name in 1975, this simple yet haunting line has become the anthem of many broken hearts. And on Wednesday, as the world remembers Phillip Hughes, former Australia captain Michael Clarke took to social media sites, and he wrote: "Everyday I think of you, but this week even more. Wish you were here buddy."

Everyday I think of you, but this week even more. Wish you were here buddy

Everyday I think of you, but this week even more. Wish you were here buddy https://t.co/j4XqKOP5fF

Cricket world paid homage to late Hughes, who died after being struck on his neck by a bouncer five years ago. He was 25. That unfortunate incident happened during a Sheffield Shield match in Sydney and died without regaining consciousness exactly five years ago. He was just three days short of his 26th birthday at the time.

Clarke was among the pall-bearers at his funeral. Hughes' death devastated Clarke, who was the skipper of the Australian national cricket team at that time. But more than a team-mate, they were best friends and sometimes Clarke considered Hughes his younger brother.

In his eulogy, an inconsolable Clarke spoke about their relationship.

“I walked to the middle of the SCG, those same blades of grass beneath my feet where he and I and so many of his mates here today have built partnerships, taken chances and lived out the dreams we paint in our heads as boys. The same stands where the crowds rose to their feet to cheer him on and that same fence he sent the ball to time and time again. And it is now forever the place where he fell,” Clarke said.

That speech at Hughes' funeral won the world's admiration and sympathy. And many considered that five and a half minute long speech as one of the finest ever given by a sportsperson.

"I don't know about you," Clarke had said, "but I keep looking for him. I know it's crazy, but I expect any minute to take a call from him or to see his face pop around the corner to call me into the next room for a story and a laugh."

Hughes had made a stunning start to his Test career when at 20, he became the youngest-ever batsman to score a century in both innings of a Test. He achieved this against South Africa in Durban against an attack consisting of Dale Steyn and Morne Morkel.

"It was kind of a care free week if that makes sense, cricket wise. It was sort of like, this is actually almost irrelevant in a way," another former Aussie captain Steve Smith was quoted as saying by 'ESPNCricinfo'.

As in the song, which touches its outro in an ad-lib, mere fans would wonder: