Diogo Jota marked his return to Wolves with a winning goal as Liverpool earned a 1-0 victory at Molineux on Monday. 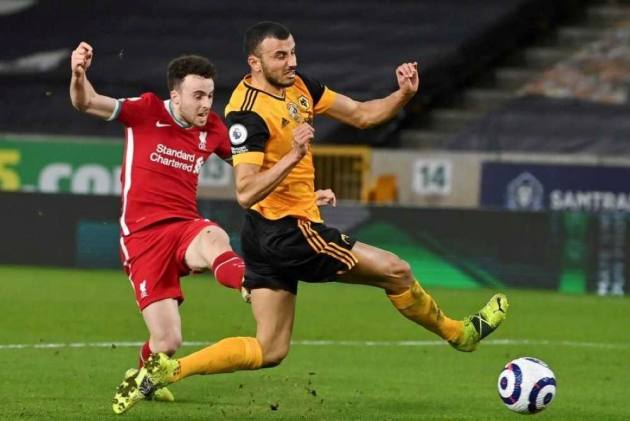 Diogo Jota marked his return to Wolves with a winning goal as Liverpool earned a 1-0 victory at Molineux on Monday. (More Football News)

Making his first appearance at his former home since a £45million transfer last year, the Portuguese netted the decisive strike of a tightly contested game.

That ensured Jurgen Klopp's side built on a recovery started against RB Leipzig in the Champions League to move up to sixth in the Premier League table.

The hosts, meanwhile, continued an up-and-down campaign with a 12th league defeat that was further soured by the late loss of goalkeeper Rui Patricio to a head injury, which prompted a 14-minute stoppage and the use of a concussion substitution.

Rui Patricio is stretchered from the field following lengthy treatment to a head injury. John Ruddy will finish the game in goal.

We will bring you more information on Rui as soon as we have it.#WOLLIV pic.twitter.com/UfLYBUIGhm

A quick start from Wolves resulted in a strong penalty claim inside the first three minutes, Alisson perhaps fortunate not to be punished for bringing down Nelson Semedo after spilling an Adama Traore cross.

But after the hosts wasted a number of promising counter-attacking opportunities, Liverpool began to grow in confidence and should have been ahead when Sadio Mane was played through on goal but failed to sort his feet in time to shoot.

The game continued in back-and-forth fashion thereafter, with Ruben Neves wasting Wolves' best chance when he drove well wide following a cross to the back post that gave him plenty of time.

And that miss was punished seconds before the half-time whistle as the returning Jota finished off a sweeping move involving Mane and Mohamed Salah with his left foot.

Nuno Espirito Santo's men started the second half as brightly as they had the first and would have hoped to see Conor Coady do better than head over an inviting cross after a half-cleared corner.

They continued to pile pressure on the champions, though, with only a strong hand from Alisson preventing a low Traore cross from being turned goalward.

Wolves struggled to create anything more meaningful across the remainder of the match, however, and could have been beaten more comfortably had a tight offside call not denied Salah four minutes from the end of normal time in an incident that saw Patricio sustain a concerning blow.

What does it mean? Reds recovery continues

If Liverpool hoped to use their progression to the Champions League quarter-finals as a springboard to improved league form, this was an ideal start.

It still remains to be seen, however, whether Klopp's men can improve the home form that has been the source of their recent ills.

Three points but tonight our thoughts are with Rui Patricio

He perhaps ended the game wishing he had done more from some promising positions - not least his early one-on-one chance - but Mane was without doubt the star man in Liverpool's attack at Molineux.

The Senegalese not only brilliantly set up Jota's decisive goal, he also took a game-high five shots and produced two key passes.

Thiago fails to build on promise

After starring alongside Fabinho in the second leg against Leipzig last week, Thiago Alcantara reverted to the player that has struggled in the early stages of his Liverpool career here.

The Spaniard picked up his customary booking, lost possession on 16 occasions and conceded more fouls than any other Reds player (three) before being subbed.

A combination of the international break and FA Cup scheduling means Liverpool are now not in action until they travel to Arsenal on April 4.

Wolves' wait will go until the day after, another Monday fixture at Molineux, this time against West Ham.