Jose Mourinho's pragmatic approach looked set to pay dividends at Molineux, but Romain Saiss headed in late on to secure a point for Wolves 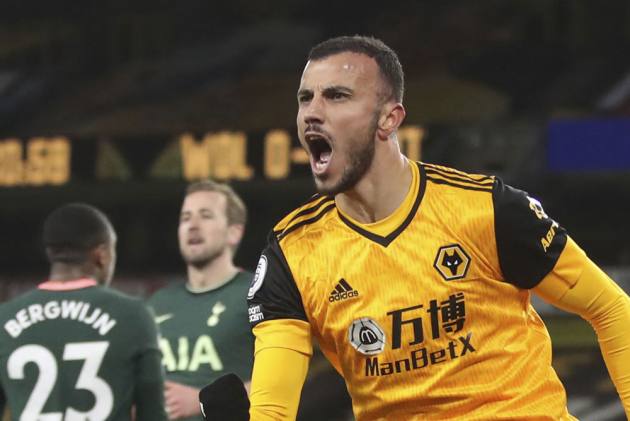 After losses to title rivals Liverpool and Leicester City, Spurs were aiming to avoid suffering a third successive league defeat for the first time since November 2012 and made a flying start as Ndombele drilled in after just 57 seconds.

Wolves looked toothless for most of the remaining 89 minutes with star forward Raul Jimenez watching on from the stands, yet their knack of getting late goals came to fruition once more.

Pedro Neto's superb corner was met by Saiss, who glanced a brilliant header beyond Hugo Lloris to again frustrate Tottenham, who passed up the chance to move up to third and were ultimately grateful for a 96th-minute Fabio Silva miss.

ðÂÂÂðÂÂ¨ðÂÂÂðÂÂÂ-ðÂÂ§ðÂÂÂðÂÂ ðÂÂÂ A late equaliser for the hosts sees the points shared at Molineux.

Wolves had been caught cold inside the opening minute as Ndombele's thumping strike fooled Rui Patricio, whose step to the right proved costly.

Ndombele then turned provider with a surging run from deep but Patricio was equal to Sergio Reguilon's effort.

Silva was left frustrated when he lashed into the side-netting before the half-hour, while Hugo Lloris kept out Daniel Podence's first-time shot.

Wolves wanted a penalty straight from the restart when Eric Dier clipped Silva, yet the VAR did not advise referee Paul Tierney to assess a replay and no spot-kick was given.

Lloris lunged in bravely at Silva's feet to deny the 18-year-old in a goalmouth scramble as Wolves started to turn the screw, although Son Heung-min, hunting his 100th Spurs goal, missed a chance to tee up Harry Kane at the other end.

Wolves' attempts looked set to prove fruitless until the 86th minute when Saiss turned in Neto's excellent delivery for an equaliser that set up a frantic finale.

Silva should have snatched all three points in stoppage time, only to head straight at Lloris as the spoils were shared.

What does it mean? Wolves' patience pays off as Spurs' late heartbreak continues

Since the start of 2018-19, only Liverpool (45) and Man Utd (44) have won more top-flight points from losing positions than Wolves (40). Their most recent three Premier League goals have all been scored in the final five minutes of matches.

Meanwhile, Spurs – who are up to fifth – have dropped nine points in 2020-21 from goals conceded in the final 10 minutes of matches, the most of any side in the Premier League.

9 - Spurs have dropped nine points in 2020/21 with goals conceded in the last 10 minutes of matches, the most of any side in the Premier League. Slip. #WOLTOTpic.twitter.com/odfDFki8vC

Ndombele's strike was the earliest Premier League goal scored from outside the box since Chelsea's Kenedy scored after 39 seconds against Norwich City in March 2016.

Only Chelsea (12) have scored more Premier League goals in the first minute of a match than Tottenham (11), and Ndombele – who turns 24 on Monday – went on to turn in an impressive display, winning 10 of his 15 duels, completing two of his four dribbles and creating two chances before he was replaced in the 70th minute.

Since masterminding a 2-0 victory in the north London derby, Mourinho has seen his team take just two points from 12 on offer.

Spurs managed only three attempts on target – the last of which came in the 21st minute – and had 45.4 per cent of the possession.

- Wolves' starting XI for this match featured seven Portuguese players (Patricio, Nelson Semedo, Neto, Joao Moutinho, Silva, Podence and Ruben Neves), the joint-most non-English players from the same country in a team's line-up in Premier League history. Fulham had seven French players in their XI versus Middlesbrough in 2003, and Newcastle United had seven Frenchmen against Liverpool in 2013.
- The home side conceded after only 57 seconds, the earliest goal they had conceded in the Premier League since April 2012 against Swansea City (Andrea Orlandi, 22 seconds).
- Since having 18 shots in the second half of their game against West Brom, Spurs have had just 22 shots in the second half of their past seven Premier League matches, mustering just one attempt in the second half of this match.
- Four of Saiss' past five Premier League goals for Wolves have been headers scored via a corner.

Spurs have three days to recover before they take on Fulham at home, while Wolves travel to in-form Manchester United on Tuesday.