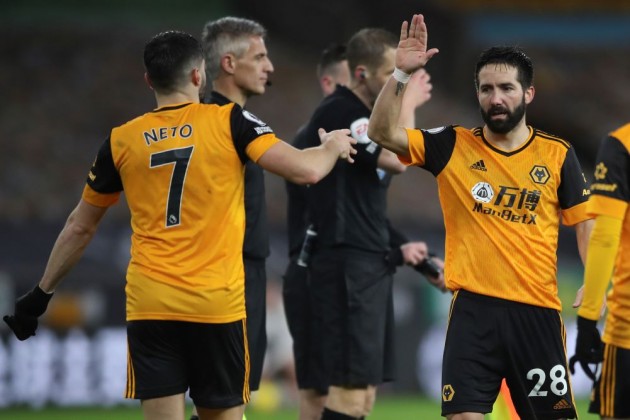 Arsenal headed into Tuesday's encounter unbeaten in their last seven league games and looked primed to extend their run to eight.

After Bukayo Saka saw an early goal disallowed, Nicolas Pepe gave them a deserved lead that was erased with the final kick of the first half as Ruben Neves converted a penalty after David Luiz was sent off.

Wolves were in control thereafter and made their one-man advantage count through a rasping strike from Moutinho, with Arsenal then reduced to nine after goalkeeper Bernd Leno inexplicably handled outside the area, a largely self-inflicted defeat leaving them eight points off the Champions League places having played a game more than fourth-placed Leicester City.

1 - In his 61st appearance at Molineux in all competitions, João Moutinho has scored his first home goal for Wolverhampton Wanderers. Stunner. pic.twitter.com/lxfRT7F4wj

Saka almost had a hat-trick in the space of the first nine minutes, the teenager lashing against the left-hand post after just 36 seconds from Thomas Partey's superb long ball before seeing a close-range effort kept out by Rui Patricio and an emphatic finish chalked off by VAR due to Alexandre Lacazette straying offside in the build-up.

Maximilian Kilman headed over from a corner and Nelson Semedo tested Leno from long range, but Wolves were fortunate to receive another let-off when Patricio turned a fierce strike from Pepe against the crossbar.

Wolves did not learn their lesson, however, and Patricio was helpless to deny Pepe in the 32nd minute as the Ivorian showed determination to win possession in the box and bend the ball into the top-right corner.

But the game turned in first-half stoppage time, David Luiz seeing red after clipping Willian Jose as he bore down on goal and Neves leaving Bernd Leno no chance with a superbly struck penalty.

Arsenal brought on Gabriel Magalhaes for Lacazette to make up for the loss of David Luiz at the back, but there was nothing Gabriel or any Gunners player could do to stop Moutinho giving Wolves the lead in stunning fashion.

The Portugal midfielder took aim from well outside the box and produced a sparkling effort that beat the dive of Leno and flew in off the left post.

But Leno was deserving of criticism in the 72nd minute when he charged out of the box and knocked a long ball out of play with his hand, his dismissal ending any hope of Arsenal avoiding a damaging loss in their top-four push.

What does it mean? - Arsenal undone by another David Luiz blunder

Since making his Premier League debut for Arsenal in August 2019, David Luiz has picked up more red cards (3) and conceded more penalties (6) than any other player in the division.

Though Leno's red ended the game as a contest, it was David Luiz's dismissal that was the turning point and, if Arsenal miss out on Champions League football for the fourth straight season, an inability to find a more reliable presence at the back will be a key factor.

It's a first win in nine in the league for Wolves, who complete a league double over the Gunners.

It took 61 games, but Moutinho is finally a Molineux goalscorer, and it was an effort worthy of the wait. All three of the midfielder's Premier League goals have come from outside the box.

With his dismal piece of decision-making, Leno became just the second goalkeeper to be sent off in a Premier League game for Arsenal, after David Seaman against West Ham in November 1993.

2 - Bernd Leno is just the second goalkeeper to be sent off in a @premierleague game for Arsenal after David Seaman against West Ham in November 1993. Shock. pic.twitter.com/YUcnTQRlej

- Arsenal suffered their first defeat in eight Premier League games (W5 D2), conceding as many goals against Wolves as in their previous seven in the competition (2).

- Wolves completed their first league double over Arsenal since 1978-79.

- Since Mikel Arteta's first game in charge of Arsenal on Boxing Day 2019, the Gunners have been shown nine Premier League red cards, six more than any other side.

- Only Sheffield United and West Brom (16 each) have conceded the first goal in more Premier League games this season than Wolves (15).

- Pepe has scored three goals for Arsenal in his last four starts in the Premier League, as many as in his previous 16 starts in the competition. He has netted in three consecutive away league appearances for the first time since January 2019, when he scored in four in a row on the road for Lille.

- Granit Xhaka made his 200th appearance in all competitions for Arsenal - since his debut for the club in August 2016, he has played 46 games more than the next player (Hector Bellerín, 154).

Arsenal visit Aston Villa on Saturday, and will hope for Wolves to do them a favour a day later by beating Leicester at Molineux.