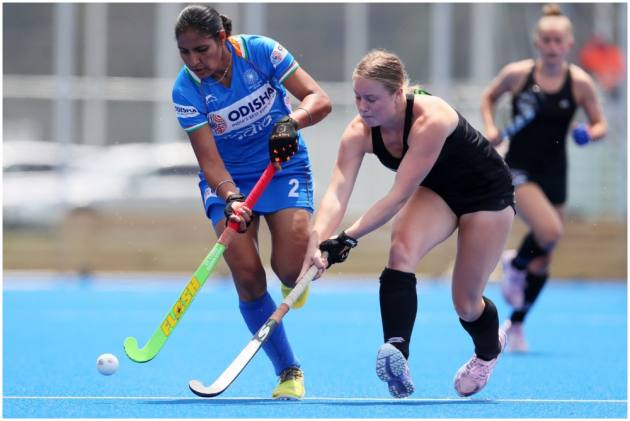 Gurjit gave India the lead in the second minute of the match after an infringement from Thailand in their defensive third awarded them a penalty stroke.  Gurjit, who scored four goals at the Tokyo Olympics, kept a cool head and put the ball in the back of the net.

Conceding an early goal put Thailand on the back foot straight away, and Vandana Katariya, the only Indian women's player to score a hat-trick at the Olympics, found the second goal five minutes later.

By the time the first quarter ended, Lilima Minz added another field goal in the 14th minute, while Gurjit and Jyoti scored two more from penalty corners in the 14th and 15th minute, giving India a 5-0 lead.

The second quarter started much the same way as India kept most of the possession giving no room to Thailand to cause any danger.

A dominating and disciplined performance by the Indian Women's Hockey Team against Thailand in the Asian Champions Trophy ðÂÂÂ#IndiaKaGame pic.twitter.com/Inwz40J6du

Within the first minute of Q2, Rajwinder Kaur, who made her international debut on Sunday, scored a field goal in the 16th minute, and in the 24th minute, Gurjit scored her third goal and Lilima scored another from a penalty corner also in the 24th minute.

The Indian team demolished the Thai defence as they struck another in the 25th minute through Gurjit, giving them a massive 9-0 lead at the end of the second quarter.

Returning from the 10-minute half-time break, India dominated by continuing to make threatening circle penetrations from the left flank. But Thailand dug in deep and defended well for the first six minutes in the third quarter.

Jyoti broke the threshold, scoring another field goal in the 36th minute to exceed India's lead by 10 goals.

A defensive error four minutes later from Thailand gave India another penalty corner, but this time Gurjit's powerful flick was deflected by the opposition. A well-constructed move from the middle late in the 43rd minute caught Thailand's defence napping as Sonika struck in her first goal in the match.

The fourth quarter saw Navneet Kaur threatening Thailand's defence with penetrating runs from the right flank. But Thailand's defensive troops managed to keep the danger at bay, preventing any further damage to the scoreline.

In the 55th minute, Monika managed to get her stick on a long pass inside the circle, as she deflected the ball into the back of the nets to exceed India's lead by another goal. Three minutes later, Gurjit scored her fifth goal of the match from a late penalty corner, adding in the 13th goal for India.

This was the Indian team’s first match since the historic fourth-place finish at the Tokyo Olympics. In the absence of Captain Rani, who has been rested from the tournament, India were led by veteran goalkeeper Savita.