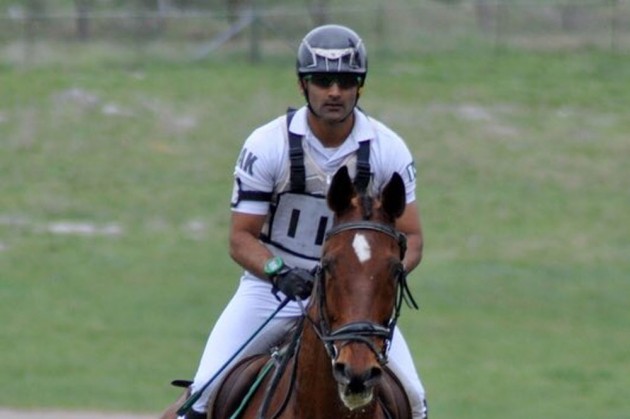 Usman Khan, the first Pakistani equestrian to qualify for the Olympics, has maintained that he will not change the name of his horse from 'Azad Kashmir', saying it was a trivial issue for him.

Indian Olympic officials are reportedly seeking legal advice on whether the name represents a political statement.

"It's a trivial issue really. My intentions are very clear. The horse was not named in response to the lockdown in Indian Kashmir," Usman told the 'Dawn' newspaper.

Usman, 38, who is based out of Australia said he had got the name of his horse registered in April 2019.

"Isn't that quite some time before the lockdown," he asked.

Usman who every well knows that he has courted controversy in politically sensitive times wants to cash in on this opportunity and get a sponsor for himself and his horse 'Azad Kashmir' so that they can take part in the quadrennial extravaganza.

"I am presently looking for sponsors to bear the cost of taking me and Azad Kashmir to the Tokyo Olympics and this will only help our cause."

Usman said the original name of the horse was 'Here to Stay'.

"But after purchasing it, I renamed it as I have done with most of the horses in my stable. This name change alone costs USD 1000 and it should fit the criteria set by international and local bodies," he said.

All the horses that he owns have been named after beautiful areas of Northern Pakistan.

"Giving them those names help me foster my connection with my Motherland."

Usman said it had taken him 15 years of crippling investment, resources and hard work to qualify for the Olympics and he really wanted to represent his country in the mega event.

Usman had also qualified for both the 2014 and 2018 Asian Games but on both occasions, he couldn't get the funding required to fly his horse 'Al-Buraq' to those events.