Sumit prevailed 5-0 in the bout against Boltaev, who wasn't lacking in intent but was definitely nowhere close to the Indian when it came to punching cleanly. 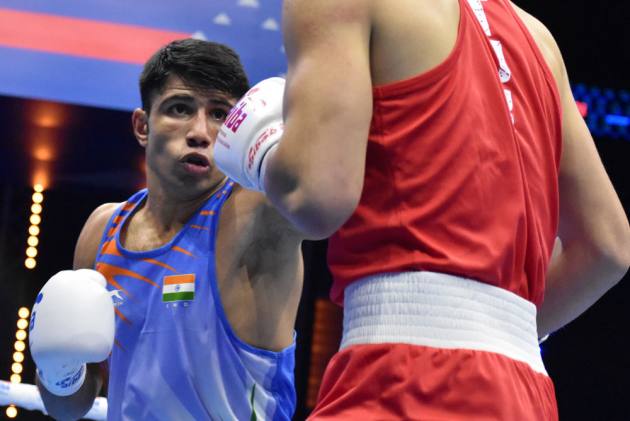 While Sumit defeated Tajikistan's Abdumalik Boltaev 5-0, Thapa, a former bronze-medallist at the global showpiece, also prevailed in a unanimous verdict against Sierra Leone's John Brown in the round of 32.

Sumit opened the proceedings for the country against Boltaev, who wasn't lacking in intent but was definitely nowhere close to the Indian when it came to punching cleanly.

Sumit also copped a warning in the second round for hitting Boltaev on the back of his head repeatedly despite being cautioned by the referee but the docking of one point had no impact on his control over the proceedings as he emerged a unanimous victor.

Sumit will face Cuba's Yoenlis Hernandez in the pre-quarterfinals on Monday.

Thapa was the last to step into the ring for India on the day, and was simply too good for Brown, who wasn't short on spirit but lacked in application.

The experienced Indian slowed him down meticulously and connected his own jabs and hooks quite well to keep the scorecards in his favour in all three rounds.

He will square off against Lounes Hamraoui of France in the last-16 stage on Monday.

However, Sachin (80kg), who got a first-round bye, lost 1-4 to American Robby Gonzales in another last-32 contest.

The Indian seemed up for an intense showdown in the opening round but eventually ran out of steam against Gonzales, who put his long range to good use by poking through the Indian's defences.

Also going bowing out was Govind Sahani (48kg) after he lost a dramatic pre-quarterfinal against Georgia's Sakhil Alakhverdovi.

Alakhverdovi fought through despite a bloodied face after sustaining a cut above his left eye.

Sahani was also docked a point in the final round for failing to keep his head up.

Sahani won the opening round on a split decision but lost the last two rounds against the gritty Georgian to lose the bout 0-4.

In a late night bout on Friday, Nishant Dev (71kg) rallied to defeat Mauritian Merven Clair 4-1 to also secure a pre-quarterfinal berth. He will be up against Mexico's Alvarez Verde in the Last-16 round on Sunday.

Apart from Nishant, three more Indian boxers will compete in the pre-quarterfinals stage on Sunday.

Asian champion Sanjeet (92kg) will take on Georgia's Giorgi Tchigladze while Akash Kumar (54kg), who received a walkover in the last round, and Narender (+92kg) will face Puerto Rico's Caleb Tirado and Tajikistan's Jakhon Qurbonov respectively.

The gold winners at the showpiece will walk away with a prize money of USD 100,000.

India are being represented by its reigning national champions across weight categories.