The Olympic qualification was at stake in three categories but all three Indians cut a sorry figure as Manish (67kg), Sunil Kumar (87kg) and Ravi (97kg) exited without a fight in the ongoing World Wrestling Championships 2019. 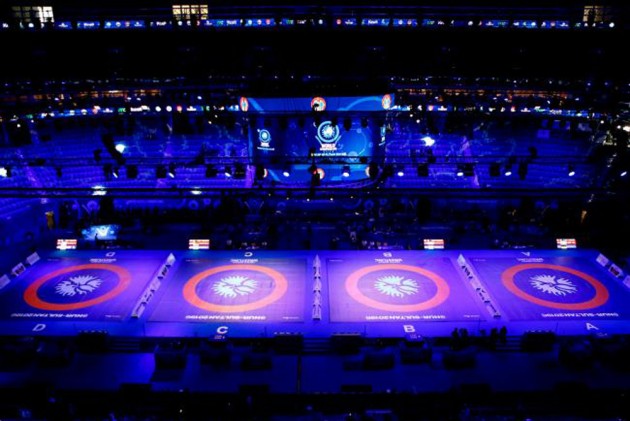 Ravi won India's first bout at the World Championships before suffering a defeat by fall as the country's Greco-Roman wrestlers' disappointing show continued in Nur-Sultan (Kazakhstan) on Sunday.

The Olympic qualification was at stake in three categories but all three Indians cut a sorry figure as Manish (67kg), Sunil Kumar (87kg) and Ravi (97kg) exited without a fight.

The four wrestlers in action on the opening day had not won a single bout and three of them did not even score a point but Ravi managed to win a bout against Chinese Taipei’s Cheng Hao Chen.

Ravi opened up a 2-0 lead with take-down move and remained defensive until the end of the period.

In the second period, the Taipei lost a point due to passivity and Ravi took advantage by employing a gut-wrench from the ground position. There was not much action in the bout as the Indian won 5-0.

In the next bout against Czech Republic’s Artur Omarov, Ravi lost two points for fleeing the mat and then conceded a passivity point.

Omarov finished the bout in a jiffy as he made the score 7-0 with two gut wrench moves and then pinned his opponent, 27 seconds before the end of the first period.

Manish opened up an early 1-0 lead but conceded 10 points in a row to lose by Techincal Superiority against Bulgaria’s Devvid Tihomirov Dimitrov.

The Bulgarain later lost his quarterfinal 0-6 to Denmark’s Fredrik Holmquist Bjerrhuus, ending Manish’s hopes to get into medal round via repechage. In the 87kg, Sunil lost 0-6 to USA’s Joseph Patrick Rau. The American lost his pre-quarterfinal by technical Superiority to Belarus’ Mikalai Stadub, ensuring the Indian's exit.