Brazil have 24 points and second-place Argentina 18, both with eight matches played, one less than the other rivals 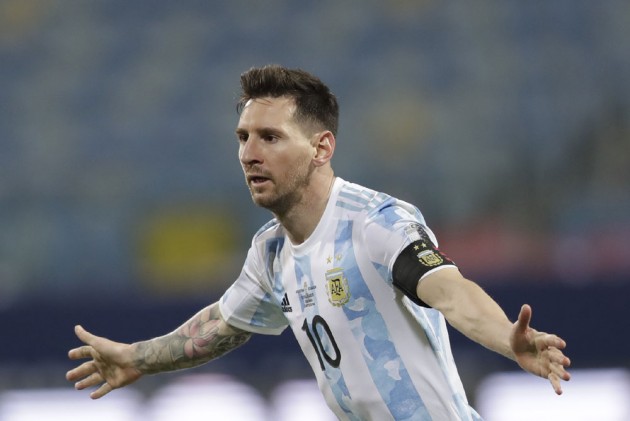 Lionel Messi shone once more in South American World Cup qualifiers, leading Argentina with all the goals in its 3-0 home win against Bolivia. (More Football News)

Meanwhile leaders Brazil counted on Neymar to secure its eighth win in eight matches, an easy 2-0 victory over Peru on Thursday.

Brazil has 24 points and second-place Argentina 18, both with eight matches played, one less than the other rivals after their superclasico on Sunday was suspended due to COVID-19 protocols. FIFA has yet to decide whether that match will be replayed.

Earlier Uruguay had a 1-0 victory over Ecuador to move into third place on the table.

South American World Cup qualifiers are scheduled to have another three rounds in October, which could trigger another war with European clubs that don't want their players to travel to the region due to demands for quarantine upon their return. Except for Argentina and Colombia, no South American team managed to bring their Premier League players for the international window.

The top four teams in South American qualifiers get direct spots at next year's FIFA World Cup in Qatar, and the fifth-place team will go into an intercontinental playoff.

But Messi made all the difference — his hat-trick made him the top international scorer in South American football history.

The 34-year-old has netted 79 for Argentina, overtaking Brazil's Pelé's tally of 77.

Messi opened the scoring for Argentina in front of about 20,000 lucky fans in the 14th minute. He moved the ball between a Bolivian defender's legs and shot from outside the box to the right of goalkeeper Carlos Lampe.

He once more showed style to add the second in the 64th minute. Messi and striker Lautaro Martinez exchanged four quick passes to put the six-time Ballon d'Or winner in great position. He still had time to dribble past one defender before scoring.

Messi completed his hat-trick in the 88th minute from close range after getting a rebound from Lampe.

A tearful Messi also celebrated with fans, who took their seats in an Argentinian stadium for the first time in 20 months due to the pandemic. He carried the Copa America trophy won against Brazil in July, Argentina's first major title in 28 years.

"Messi is leaving a legacy to all players of the national team," coach Lionel Scaloni said about the record.

"I am proud to have him as a player."

Neymar was the key figure at the Arena Pernambuco, assisting Everton Ribeiro in the 14th minute and scoring his own from close range in the 40th. But he was still upset at the end of the match, despite overtaking Romário as the Seleção's top goal scorer in World Cup qualifiers, with 12 goals.

"I don't know what else I need to do with this shirt for people to respect Neymar," he said.

Local media accused the striker of being out of shape in the 1-0 win at Chile last week, which apparently stimulated him to walk around shirtless during trainings to show he is fit.

Brazil showed against Peru it could still field a competitive team despite being without 10 players who were instructed by their clubs not to travel to South America for the international window. Alisson, Fabinho, Roberto Firmino (Liverpool); Ederson, Gabriel Jesus (Manchester City); Thiago Silva (Chelsea); Fred (Manchester United); Richarlison (Everton), Raphinha (Leeds), Claudinho and Malcom (Zenit) were not available to the Seleção.

Also on Thursday, Uruguay managed to get a last-minute home win against Ecuador which was key for its hopes to qualify for the World Cup. The header by Gastón Pereiro in stoppage time allowed Uruguay to get to 15 points and take Ecuador's third place on the table. The Ecuadorians remain with 13 points, in fourth, also well positioned to go to Qatar next year.

Colombia also got an important 3-1 home victory against Chile in a great performance by striker Miguel Borja. He scored the first from the spot in the 19th minute and added another one minute later. Chile reduced the deficit in the 56th minute with Jean Menezes, but Luis Diaz added the final goal for Colombia in the 74th minute.

Also on Thursday, Paraguay beat Venezuela 2-1. The hosts scored with David Martinez and Alejandro Romero in the 7th and 46th minutes. The visitors netted their only goal in the 90th minute with Jhon Chancellor.