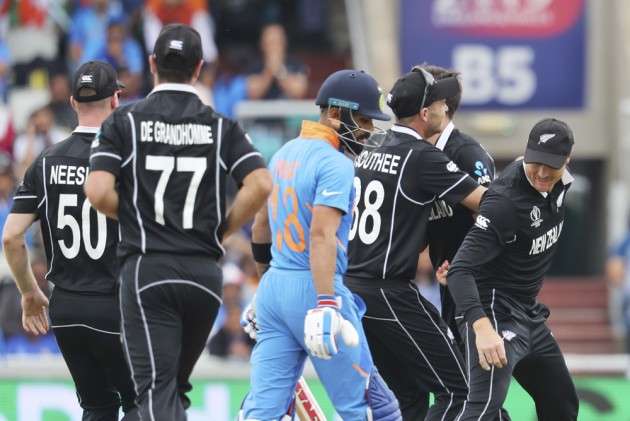 India crashed to a Cricket World Cup semifinal defeat against New Zealand, at Old Trafford on Wednesday. In a clash played over two days due to rain, New Zealand staged a comeback with some brilliant bowling and fielding display, scripting an 18-run victory. Indian captain Virat Kohli praised Ravindra Jadeja for his heroic effort with MS Dhoni but praised the Kiwis for maintaining composure during crunch moments.

The Indian bowling lineup were good against Kane Williamson's side, closing them down at 239-8 in 50 overs, but New Zealand started their bowling in an excellent manner, sending KL Rahul, Rohit Sharma and Kohli back to the pavilion for one run each. Rahul and Rohit were bowled by Matt Henry (man of the match), while Kohli was scalped by Trent Boult.

"The first half, we were very, very good. We got what we needed at that point. We thought we had restricted New Zealand to a chaseable score but the way they come out with the ball was what made the difference. I think it was the skill level on display (from NZ bowlers) was there for all to see," said Kohli.

"It's a game of margins ... 45 minutes of bad cricket can throw you out. New Zealand deserved to win ... they were sharper in crunch moments," said Kohli.

He also heaped praise on Jadeja, who was excellent while bowling, notching a wicket coupled with two catches. While batting, Jadeja smashed 77 off 59 balls, packed with four sixes and four fours.

"Jadeja had a really good couple of games and it's his performances that are a huge positive. It was a good representation of his skillset and as to what he brings to the team," quipped Kohli.

Kohli also feels that India's shot selection could have been better.

"Really proud of the way we competed throughout the tournament. As I said, come the knockouts, New Zealand were braver than us and deserve to win. Thanks to all the fans, thanks for coming out in huge numbers," concluded Kohli.

India were excellent during the league phase, losing just one match and topping the table in the final day after defeating Sri Lanka. Meanwhile, New Zealand had a dominating start but a poor finish pushed them to a fourth-placed finish in dramatic manner. Next up, New Zealand will face the winner of the other semifinal clash between Australia and England at Edgbaston on July 11.