Sportspersons like Avani Lekhara are a rare breed. The 20-year-old shooter created history at Tokyo 2020 when she won two Paralympic medals. A car accident made her a paraplegic at the age of 11. 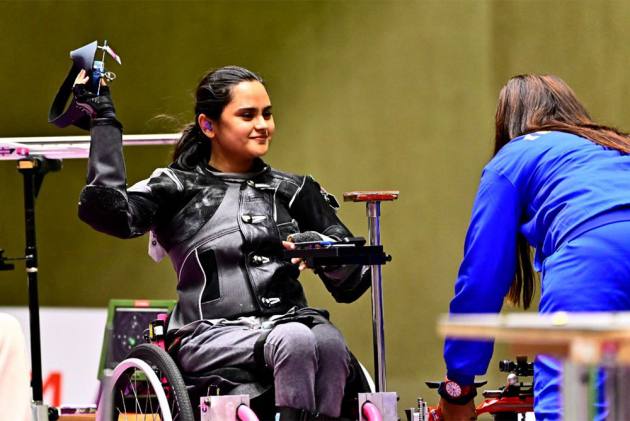 Felicitation functions have not stopped ever since the Indian Paralympics contingent returned from Tokyo 2020 with a record haul of 19 medals. Whether at a party with the Prime Minister of India or walking the red carpet at Rashtrapati Bhavan, sportspersons like Avani Lekhara, Sumit Antil, Pramod Bhagat, Manish Narwal and Krisha Nagar have grabbed the spotlight with poise and dignity. (More Sports News)

They may be physically challenged in various ways, but these amazing athletes have sent out a message, loud and clear -- Hum Kisise Kum Nahi (We are less than no one).

The Jaipur girl, who was rendered a paraplegic (paralysis of the legs and lower body) following a car crash when she was 11, became the first Indian woman to win a Paralympic gold.

Avani's smiling face and graceful demeanour belie her intense desire to be the world's best rifle shooter in her category. The Tokyo 2020 gold is just not enough for her.

A law student, Avani is a rare breed of sportspersons who have balanced an entirely different career alongside their Olympic training. Not only does Avani want to win multiple medals at Paris Olympics 2024 but become a judge one day.

“I try to balance my shooting training and my law classes. One goal has been realised but the dream to become a judge remains,” said Avani, who is undertaking the five-year integrated BA-LLB (Bachelor of Arts-Bachelor of Legislative Law) course under Rajasthan University.

Disability was probably a trigger to do something extraordinary in life. In 2015, when Avani Lekhara won her first school-level competition alongside able-bodied shooters, Avani knew that being wheelchair-bound was nothing but a harsh reality.

There were two options in front of Avani. Either sulk and lead a handicapped life full of negativity or embrace a challenge and channelise all your inner strength to be someone special.

With the help of her parents and coaches, Avani Lekhara chose the second path.

“I have no regrets, really. Yes, I used to think a lot about these things in the initial days. Shooting was hard. Being a wheelchair user and going out to shoot, I was low on confidence. But that school event was a gamechanger.

"Starting from there and winning a Paralympic gold six years down the line has been quite a challenging journey. Now I am enjoying the fruit of hard work and sacrifices me, my parents and coaches made,” said Avani.

Intensely confident, Avani wants to be successful, more accomplished than the man who inspired her to take up shooting, Bindra. She has already overtaken Bindra with two medals but Avani says she is not done yet.

"I don't want to be compared with anybody. I want to be known as Avani Lekhara," she says. Interestingly, Avani has never met Bindra.

"I made a few mistakes in Tokyo. There are still many things to be fixed. Paris 2024 will be my big test and if I can win multiple medals again, I will be satisfied," said Avani.