Defending champion Koneru Humpy is currently in the joint second spot at the World Rapid Chess Championship 2021 after posting three victories in a row in Warsaw in Poland. R Vaishali and Padmini Rout are the next best Indians. 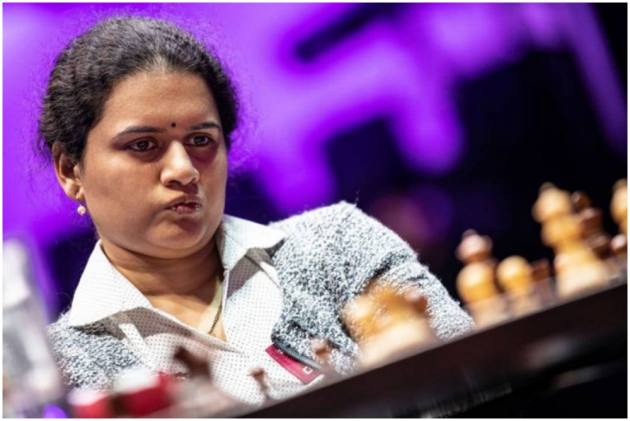 Defending champion Koneru Humpy bounced back in style after a slow start, posting three wins and a draw to jump to joint second spot with six points in the women's section of the FIDE World Rapid Chess Championship 2021 in Warsaw, Poland. (More Sports News)

With three victories in a row and a draw against Polina Shuvalova in the eighth round, Humpy has reached the top board and will be facing leader Alexandra Kosteniuk on the final day of the rapid event.

While Vaishali got the better of Ukraine's Inna Gopanenko in round eight, Rout defeated Russia's Baira Kovanova. Kosteniuk is on 7.5 points, one and a half (points) ahead of the rest of the field after eight rounds, with the last four to be played later on Tuesday.

In the Open event, world number one Magnus Carlsen has 7.5 points after nine rounds, half a point ahead of everyone else. He is chased by three players, all on seven points -- Russia's Alexander Grischuk and Ian Nepomniachtchi and the big surprise of the tournament, 17-year-old Nodirbek Abdusattorov of Uzbekistan.

Following a draw in round six with Baadur Jobava, Carlsen demolished the challenge of world number two, Alireza Firouzja, the 18-year old. Carlsen finished the day on a high, with a win over the fast-rising Pole Jan-Krzysztof Duda.

Among Indians, Mitrabha Guha and D Gukesh, both have six points after nine rounds and are placed 22nd and 23rd respectively.

Gukesh posted wins over Nikolas Theodorou of Greece and Tigran Petrosian of Armenia in the eighth and ninth rounds, while Guha beat Russia's Alexandr Predke in the eighth before drawing against former world championship challenger Sergey Karjakin in the subsequent round.