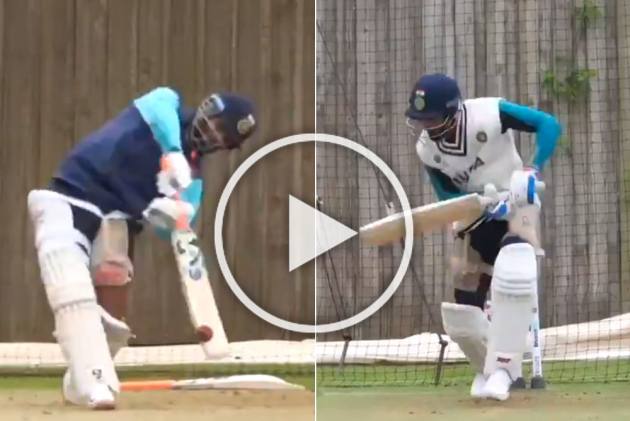 India carried out their first group practice session at a ground adjacent to Ageas Bowl here on Thursday, five days after being allowed staggered training in the run-up to the World Test Championship final against New Zealand. (More Cricket News)

It was the first time the players mixed with their teammates on the ground after being allowed to run in the gymnasium and the main playing field at different time slots on completion of the third day of their hard quarantine in the UK.

"We have had our first group training session and the intensity was high Fire. #TeamIndia's preparations are on in full swing for the #WTC21 Final," the BCCI wrote in a Twitter post along with a short video of the training session.

We have had our first group training session and the intensity was high ðÂÂ¥#TeamIndia's ðÂÂ®ðÂÂ³ preparations are on in full swing for the #WTC21 Final ðÂÂÂ pic.twitter.com/MkHwh5wAYp

The players had a full net session, where the likes of skipper Virat Kohli, Rohit Sharma, Cheteshwar Pujara, Rishabh Pant batted for a considerable amount of time and faced throw-downs as well.

The bowlers too had an intense session with all the main players -- Ishant Sharma, Mohammed Shami, Jasprit Bumrah, Mohammed Siraj and Ravichandran Ashwin -- participating in the practice session.

The nets were followed by a fielding session under fielding coach R Sridhar, which mostly focussed on catching in the slip cordon.

Earlier, the players were allowed to come out of their Hilton Hotel rooms, a Hampshire Bowl property, on the third day, following which they started their individual training.

The players were also provided basic equipments in their rooms for exercise purposes.