Talking about the importance of Cheteshwar Pujara, Sachin Tendulkar said that people's perspective of the game has changed because of T20 where only one skill -- hitting the ball out of the park -- is appreciated 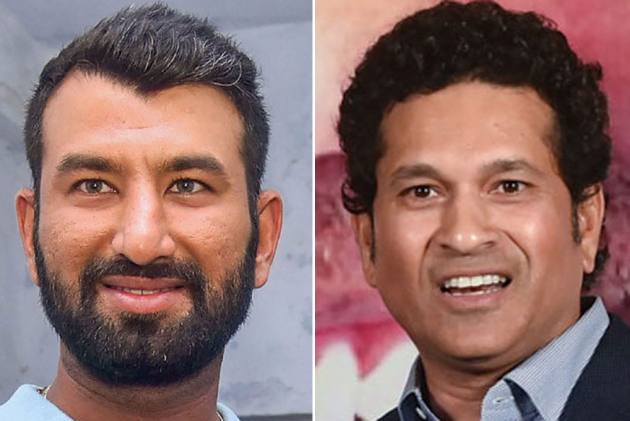 Cheteshwar Pujara's style of batsmanship is integral to Team India's success and critics who haven't achieved anything close to what he has for the country should just take it a bit easy, feels former captain and batting legend Sachin Tendulkar. (More Cricket News)

Pujara, despite his lion-hearted effort in Australia, has often faced the criticism about not showing enough intent to keep the scoreboard ticking.

Tendulkar, in an interview to PTI, said this perspective is faulty and also spoke on a host of issues ahead of India's World Test Championship final against New Zealand starting June 18 in Southampton.

"It's like five fingers in your hands. Each finger has a different role and Pujara is an integral part of our team. I really like what Pujara has done for India. Rather than scrutinising his each innings, we should be appreciative of what he has done for India.

"Guys who are digging deep into his technique and rotation, I don't think those guys have played as much top level cricket as Pujara," the legendary right-hander took Pujara's sceptics to the cleaners.

Tendulkar feels that people's perspective has changed because of T20 where only one skill -- hitting the ball out of park -- is appreciated.

"They possibly don't understand. In today's age of T20, probably if someone can hit the ball, he is regarded as a good player," he said with a hint of sarcasm.

"(It is) not necessary that person has to be a good Test player. In Test cricket, you need much more than just hitting the ball and trying to play big shots."

For those who are concerned about strike rates in Tests, Tendulkar feels that India have a lot of players with attacking instincts.

"For strike-rate, we have players like Rishabh Pant and Ravindra Jadeja. They can always increase the strike rate. But when it comes to tiring the opposition and where you require planning and vision to execute whatever your strategies are, for that you need a Cheteshwar."

Talk about the team combination for the World Test Championship final and the holder of 100 international tons feels that both Ravichandran Ashwin and Ravindra Jadeja can be effective even if there isn't much help off the surface at the Hampshire Bowl in Southampton.

"The possibility, according to me, is to play three fast bowlers and two spinners because both (Ashwin and Jadeja) can bat. Eventually how the team management feels after looking at the wicket matters," Tendulkar said.

So what if the fourth and fifth day wicket doesn't offer much help for spinners?

"So it's not always that an off-spinner has to turn the ball and get the batter out at short leg," Tendulkar replied when asked if Ashwin could be as effective in case the pitch remains on the flatter side.

The straighter deliveries create an illusion and batsmen always are in a dilemma while trying to play for the turn, Tendulkar said.

"If an off-spinner can bowl a straighter one, the edge would go to the slips or there could be a caught behind. Same thing with left-arm spinners, it doesn't have to be pitching on leg-middle and turning away from the right hander.

"It could be an arm ball that can get you a leg before or bowled. When the ball doesn't turn, that also requires skills to play," said the owner of over 34,000 international runs.

Tendulkar wants both Ashwin and Jadeja to use the cooler and windy conditions to their advantage.

"In England, spinners can do a lot in the air also. They can get a lot more drift due to the windy conditions and can also use the shine of the ball. If the shine is maintained well, the ball can drift both ways," he said.

"It all depends on how you hold the ball and how you grip the ball. The drift is always more in England. In India, you get help off the surface but in England you will get help in the air also," the maestro added.

He also had a word of advice for Rohit Sharma and Shubman Gill, who are set to open the batting.

"When your hands are close to your body, you are in better control of defending the ball and playing as late as possible. But when hands start going away, there is less control on your bat swing and balance is affected."

While New Zealand, coming into the WTC final with two Test matches, "hold an edge" compared to India's "simulated practice games", Tendulkar feels the bowling attacks of both teams being on even keel will make it a great contest.

"See all four are different bowlers. Tim Southee takes it away from right-handers, Trent boult brings the ball back into the right-handers, Kyle Jamieson hits the deck at good length and Neil Wagner keeps it short of length with odd pitch-up delivery.

"There is a decent variety in their bowling attack," he concluded.