Ravinder will take on Armenia's Arsen Harutyunyan, the European champion bronze medallist, in the evening session on Sunday (October 3). 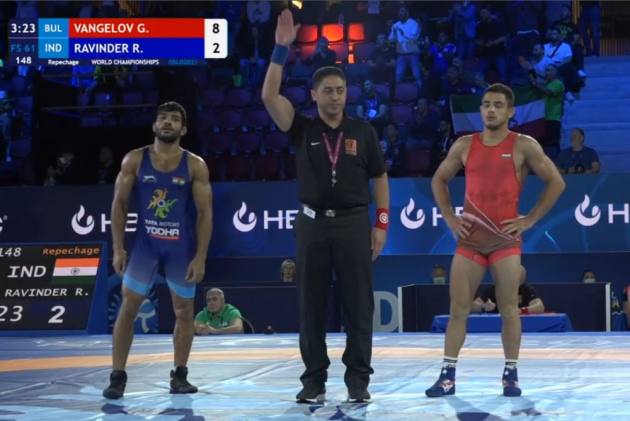 Showing nerves of steel, Indian wrestler Ravinder pulled off a sensational come-from-behind 'victory by fall' against Bulgaria's Georgi Valentinov Vangelov after trailing by a huge 0-8 margin in the World Championship repechage round to enter the 61kg bronze play-off in Oslo, Norway on Sunday. (More Sports News)

Ravinder's victory was similar to Ravi Dahiya's incredible semifinal win at the Tokyo Olympics when he trailed 2-9 but eventually pinned his rival.

The Bulgarian dominated the bout by clutching Ravinder's right arm, making moves after moves to pull away.

Ravinder, though, was unperturbed and changed the complexion of the bout with a single-leg attack move and got himself into a position from where he could press Vangelov's back on the mat towards the end of the first period.

He will now fight for bronze medal against Armenia's Arsen Harutyunyan, the European champion bronze medallist, in the evening session.

However, other Indians in the fray could not go beyond the pre-quarterfinals.

Pankaj Malik won his 57kg qualification round 4-3 after trailing 0-3 but later lost his pre-quarterfinal bout by technical superiority to Turkey's Suleyman Atli, the reigning European champion and 2019 world silver medallist.

Atli needed only 63 seconds to get to the winning lead as he finished the bout with his quick gut wrench moves.

Pruthviraj Patil entered straight into 92kg pre-quarterfinals but his challenge lasted only 32 seconds as he lost to Azebaijan's Osman Nurmagomedov in quick time.