The eighth-seeded Anett Kontaveit had early breaks in both sets to beat the French Open champion Barbora Krejcikova in just 75 minutes for her 11th consecutive victory. 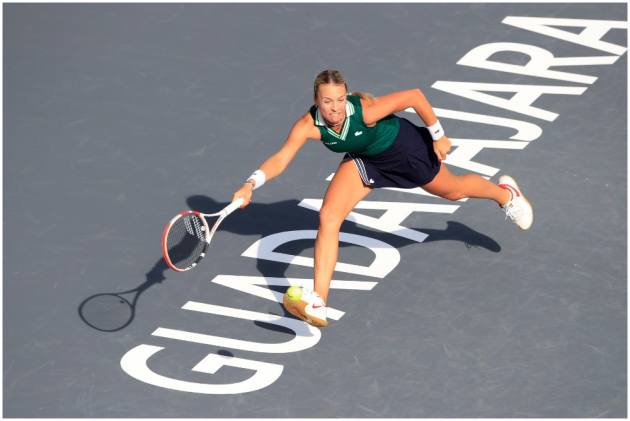 Anett Kontaveit extended her hot streak with a 6-3, 6-4 win over second-seeded Barbora Krejcikova on Wednesday in the opening match at the WTA Finals. (More Tennis News)

The eighth-seeded Kontaveit had early breaks in both sets to beat the French Open champion in just 75 minutes for her 11th consecutive victory.

Kontaveit has won 27 of her last 29 matches, which include her title run at Ostrava where she beat Paula Badosa and Maria Sakkari, both of whom are competing in the season-ending WTA Finals.

“I think throughout my career, I’ve been in sort of top 30 for a lot of years,” Kontaveit said. “During the summer I was on a bit of a losing streak, then I started working with Dmitry (Tursunov) and was really hoping to get a few wins. I managed to win Cleveland, then it just sort of started rolling from there”.

Tursunov a former world No. 20, started working with Kontaveit at the Cincinnati Masters, where the 25-year-old Estonian lost in the first round.

Since then, Kontaveit has soared from No. 30 to No. 8 in the rankings and edged out Ons Jabeur for the last spot in the season-ending championship by beating Simona Halep in the final of the Transylvania Open.

“I’ve been believing in myself a little bit more, and the game definitely has clicked from just getting more wins and playing a lot of tennis and really feeling comfortable,” Kontaveit said.

Krejcikova, the only reigning major winner in the field, started the year ranked 65th but captured three titles to qualify for the WTA Finals.

In doubles, the Japanese pair of Shuko Aoyama and Ena Shibahara had a 6-0, 6-4 win over Darija Jurak and Andreja Klepac.

The tournament, which was canceled last year because of the COVID-19 pandemic, is played in a round-robin format.

The event has a total prize pool of $5 million and is being played at the Akron Tennis Stadium in Zapopan, a suburb of Guadalajara.

The WTA Finals are being played in Guadalajara for this year only, with the event scheduled to return to Shenzhen, China in 2022.