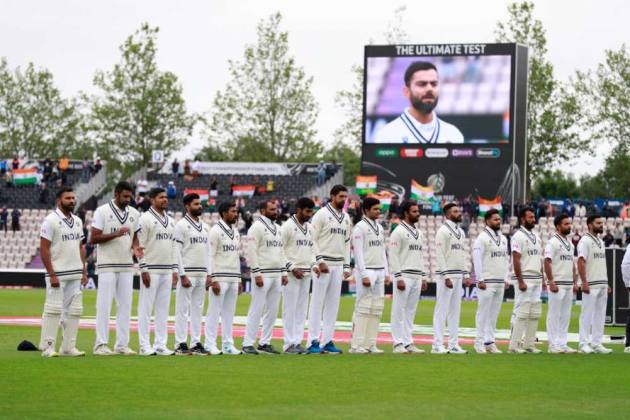 The 91-year-old Milkha Singh died at Chandigarh's PGIMER hospital on Friday night after battling COVID-19 for a month.

Milkha Singh is one of independent India's biggest sporting icons and will be cremated in Chandigarh with full state honours.

The sprint legends death led to outpouring of tributes from the sports fraternity.

Top Indian players, including skipper Virat Kohli and coach Ravi Shastri, had already posted their condolence messages on Twitter and the entire Indian team on the day wore the arm band as a mark of respect for the departed soul.

This is one of the rare occasions when Indian cricket team wore black armbands for a legend of Olympic sports.

"The Indian Cricket Team is wearing black armbands in remembrance of Milkha Singhji, who passed away due to COVID-19," the BCCI media cell posted a message.

#TeamIndia is wearing black armbands in remembrance of Milkha Singhji, who passed away due to COVID-19. ðÂÂÂ#WTC21

Earlier, skipper Kohli paid his tribute to the legendary Olympian, who died on Friday.

"A legacy that inspired a whole nation to aim for excellence. To never give up and chase your dreams. Rest in Peace MilkhaSingh ji. You will never be forgotten," Kohli tweeted.

A legacy that inspired a whole nation to aim for excellence. To never give up and chase your dreams. Rest in Peace #MilkhaSingh ji ð. You will never be forgotten. pic.twitter.com/IXVmM86Hiv

The day one of the title clash on Friday was washed out.