Saikhom Mirabai Chanu, a former world champion, had left the 2016 Rio Olympics in tears after failing to log a legitimate lift but five years on, she displayed the brilliant composure in Tokyo for a historic silver medal. 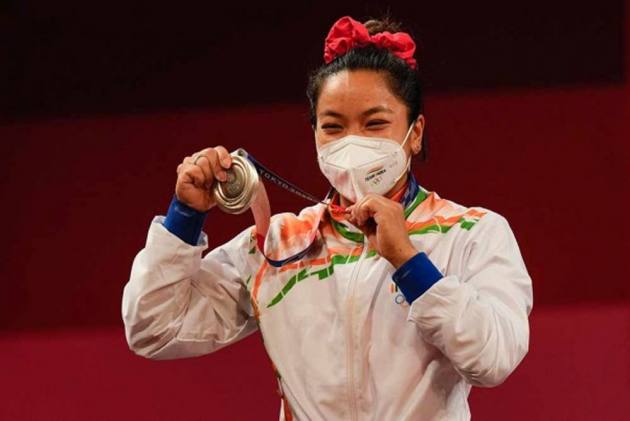 Saikhom Mirabai Chanu's heartwarming tale of redemption at the Tokyo Olympics was the defining moment for Indian weightlifting in a reasonably successful 2021 but the sport itself faced an uncertain future globally with long-standing governance and doping-related problems threatening its place in the Olympics going forward. (More Sports News)

Chanu, a former world champion, had left the 2016 Rio Olympics in tears after failing to log a legitimate lift but five years on, she displayed the brilliant composure in Tokyo for a historic silver medal to bury the ghosts of the past.

This, despite the fact that her plans took a hit when the Olympics were postponed by a year, leading to her schedule going haywire amid the COVID-19 pandemic.

It was a confusing period filled with anxiety but then she knew how to pull herself out of the abyss, having done that remarkably well after Rio.

She set a new world record in the clean and jerk section and also bettered her own national record en route winning her first Asian Championship medal, a bronze in April.

The 27-year-old Indian lifted 86kg in snatch and a world record of 119kg in clean and jerk for a total of 205kg, getting the better of both her Chinese opponents who won the gold and silver.

The year only got better for Chanu, who now has medals in all big tournaments barring the Asian Games.

With a new world record in her kitty and an imbalance issue sorted, Chanu, was one of India's brightest medal hopes heading into the Olympics and she lived up to that top billing.

She opened the country's tally on the opening day, an unprecedented feat that sent the entire nation into a frenzy.

Sporting Olympic-ring-shaped earrings gifted to her by her mother before the 2016 Rio Games, the diminutive Iron lady from Manipur capitalised on the not-so-competitive field and clinched the 49kg category silver medal in Tokyo.

Born in a poor family in Nongpok Kakching village about 20 kilometres from Imphal, Chanu, whose childhood was spent cutting and collecting wood from the nearby hills, and fetching water from nearby ponds in milk powder cans, lifted a total of 202kg (87kg+115kg).

It was not her personal best but it was enough to end India's over two-decade-long wait for a weightlifting medal at the Olympics. Karnam Malleswari was the first to do that with a bronze in the Sydney games in 2000.

With that massive achievement, Chanu's year ended as the Manipuri pulled out of the World Championship and Commonwealth Championships which were held simultaneously.

While Chanu was the lone ranger for India in weightlifting at the Olympics, Jeremy Lalrinnunga, touted as the one for the future in the sport, endured a bittersweet year.

He missed out on an Olympic spot in the 67kg category due to a knee injury suffered during the Asian Championships which also compromised his performance at the junior world championships a month later.

However, the teenager from Mizoram, who is a 2018 Youth Olympics champion, was able to end the year with a gold medal at the Commonwealth Championships earlier this month.

With a top of the podium finish at the event, Jeremy also booked a spot for the 2022 Birmingham Commonwealth Games as did Achinta Sheuli (73kg), who also bagged a silver medal at the junior world championships in May.

The country's lifters, despite capping off the year by winning 18 medals in the Commonwealth Championships and smashing several national records, weren't competitive at the Worlds, which was pretty much expected.

In the global scheme of things, as lifters around the world continued to harbour dreams of participating in the Olympics, the fate of the sport at future Games hung in balance.

Dismayed by decades of rampant doping, bribery, vote-rigging and corruption at weightlifting's highest levels, the International Olympic Committee (IOC) finally took action and threatened to drop the sport from the Olympic roster.

Earlier this month, the International Weightlifting Federation (IWF) was described as a problem due to corruption and history of doping by IOC president Thomas Bach.

"The IWF and its future leadership must demonstrate its transition towards compliance and effective change of culture. Furthermore, they must successfully address the historical incidence of doping in the sport and ensure the integrity, robustness and full independence of its anti-doping programme," Bach said.

Weightlifting was left off the initial list for the 2028 Los Angeles Games, which will be placed before the IOC members for approval in February.

Since then, the IWF has been busy repairing its tarnished image but only time will tell whether it would be able to secure a future for the sport which has seen its quota of athletes come down from 260 at the Rio Olympics to 120 at the 2024 Paris Games.