A historic bronze-winning show at Tokyo Olympics by the men's team and an outstanding fourth-place finish for the women's team infused fresh life into the game which was in danger of slipping into oblivion. 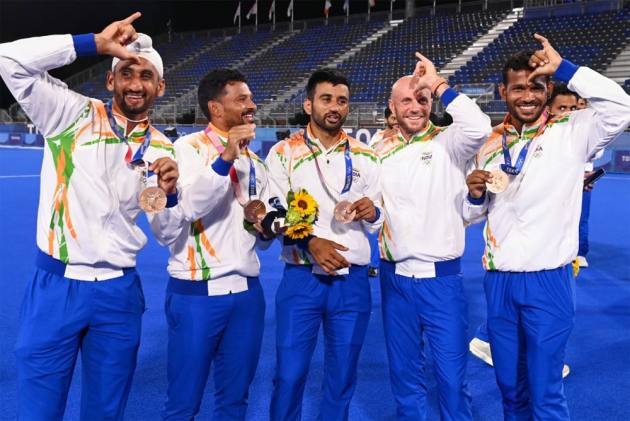 A bronze medal was good enough to write a golden chapter in Indian hockey, which was desperately seeking a revival for long, as Indian men and women teams conjured up an inspirational show at the Tokyo Games which will be remembered for ages. (More Hockey News)

A historic bronze-winning show by the men's team and an outstanding fourth place finish for the women's team infused fresh life into the game which was in danger of slipping into oblivion.

Defying all odds and challenges thrown by the COVID-19 pandemic, Indian men's team ushered in a new dawn in 2021 by ending a 41-year long wait a medal at the Olympics - a stage which it owned in its glorious past.

The women's team narrowly missed out on a historic bronze but its best-ever show at the showpiece made it even more memorable for the fans who emotionally connect with the game.

The players were confined to a bio-bubble at the SAI Centre in Bengaluru in 2020 but the year 2021 started on a bright note as the Indian men's team fought hard against Germany and Great Britain to finish the four-match European tour with two wins and as many draws.

The upward swing continued as India continued its unbeaten run on the Argentina tour, beating the 2016 Olympic champions twice and drawing as many in four practice games.

The team also won against the Los Leones in the two-match FIH Pro League tie to set the momentum for what eventually turned out to be a watershed year for Indian hockey.

Next came the most important event for the eight-time past winners, the Tokyo Olympics, where India finished second in pool stages, winning four out of five matches.

The Manpreet-led side defeated Great Britain 3-1 in the quarterfinal before losing 2-5 against Belgium in the last four round.

However, India staged a remarkable comeback and earned a 5-4 win over Germany to clinch the much-needed bronze medal.

By virtue of their historic Olympic campaign, the Indians swept the FIH Hockey Star Awards 2021 winning all categories, which created a bit of controversy with Olympic champions Belgium crying foul.

Harmanpreet Singh was crowned the FIH Player of the Year, PR Sreejesh won the Goalkeeper of the Year, Vivek Sagar Prasad won FIH Rising Star of the Year award for the second consecutive time and India's chief coach Graham Reid was awarded the FIH Coach of the Year.

The Olympic glory also earned national recognitions for all the members of the hockey team with PR Sreejesh and skipper Manpreet being honoured with the prestigious Major Dhyan Chand Khel Ratna Award, the highest sporting honour of the country, and all other players receiving the Arjuna award for their accomplishment.

The year, however, ended on a bit sad note for India as they failed to defend their Asian Champions Trophy title, finishing third after beating arch-rivals Pakistan 4-3 in the bronze medal match.

The Indian women's hockey team also added to the cherry by achieving many firsts in 2021.

From a historic fourth-place finish at the Tokyo Olympics to achieving the best-ever FIH world rankings to sweeping FIH Hockey Stars Awards 2021 in all categories, the year gone by was nothing short of a fairytale for the Indian women team.

The Rani Rampal-led side, that started the Olympic campaign with three losses, later pulled off, arguably, one of the biggest upsets in world hockey with win over mighty Australia in the quarterfinals.

But as luck would have it, the Indian women missed out on an Olympic medal by whisker after losing 1-2 to Argentina in the semifinals before suffering 3-4 heartbreak at the hands of Great Britain in the bronze medal match.

But the fourth place finish was more than enough to build women hockey's identity in the country.

The fourth-place finish also gave the Indian women's team its highest-ever FIH world ranking, eighth, in August but will end the year a rung below in the ninth spot due to the side's withdrawal from the women's Asian Champions Trophy 2021 in Korea after being hit by the dreaded virus.

However, the Indian junior men's hockey team turned out to be a big let down at the end of the year as it failed to defend its World Cup title in Bhubaneswar earlier this month. The team finished fourth after losing 1-3 to France in the bronze medal play-off.

The year gone by has boosted confidence of the Blue Sticks ahead of two major events lined up next year -- the Asian Games and Birmingham Commonwealth Games.

The self belief is first major prerequisite for success and the two teams now have it in abundance.